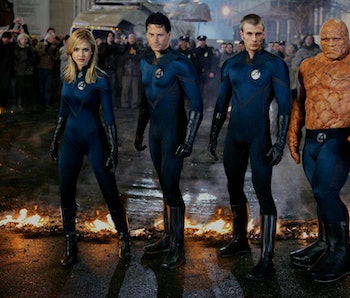 Now that Disney owns 20th Century Fox, you can expect all the X-Men, Fantastic Four, and maybe even the Deadpool movies to make their way over to Disney+ eventually. However, the first of those movies to make to leap might come as a bit of a shock. You probably weren’t hollering for Fantastic Four: Rise of the Silver Surfer, but this overlooked 2007 release is worth a second look.

Fantastic Four: Rise of the Silver Surfer hit Disney+ on January 1, which also marked the unexpected departure of several other movies from Disney+ (including Home Alone and Home Alone 2). Over in the Netherlands — where Disney first tested its streaming service — fans can also watch X-Men 1, 2, 3, 4, and Fantastic 4 (2005). That may be a sign of things to come, but in the meantime, let’s dive into what makes Rise of the Silver Surfer an underappreciated classic.

Adapting Marvel’s Fantastic Four to the big screen has been an uphill battle. Counting the disastrous 2015 film starring Michael B. Jordan and Miles Teller and the 1994 adaptation that never saw the light of day, Fantastic Four and its sequel Rise of the Silver Surfer aren’t looking too bad in hindsight. While 2005’s Fantastic Four was universally panned, with a 27% Rotten Tomatoes score, Rise of the Silver Surfer was a slight upgrade in the eyes of both critics and fans, but not by much. Still, I can confidently say that it’s still very watchable.

For one thing, Rise of the Silver Surfer’s plot is actually coherent, if flimsy. Don’t let anyone convince you otherwise.

The premise is simple but solid. While Mr. Fantastic (Ioan Gruffudd), the Invisible Woman (Jessica Alba), Human Torch (Chris Evans pre-Captain America), and The Thing (Michael Chiklis) cope with the possibility of breaking up the team, they’re faced with an intergalactic threat after meeting the mysterious Silver Surfer.

Despite all of its shortcomings and certain nonsensical plotlines, Rise of the Silver Surfer is a resounding example of how humor, a bickering team, and an enigmatic antagonist can make for a highly enjoyable superhero movie. At one point, Johnny Storm asks Ben Grimm how he and Alicia Masters manage to have sex. It’s that kind of juvenile humor that’s scattered throughout the film that makes it hard not to laugh. Even when the film is trying its hardest to be serious, like when the team has a big fight after Johnny realizes Sue and Reed might leave, its over-the-top style is part of why it’s so ridiculously entertaining.

Plus, Fantastic Four 2 gave us the sleek-looking Silver Surfer, a scientist turned surfboard-riding space messenger for the planet-eating Galactus. His metallic skin, the willingness he has to help the Fantastic Four, and the way the team works together in the final fight sequence, as a result, is top-notch. Seriously, this movie gives one of the best versions of the character, portrayed as a lonely, world-hopping humanoid who’s lost all hope and become bound to do a powerful being’s bidding.

This movie got a lot of flack for being bad (and that’s fair), but in a way, it was simply ahead of its time. Think about it. While Rise of the Silver Surfer was never a part of the Marvel Cinematic Universe, it was basically an MCU movie before the Marvel Cinematic Universe was ever a thing, establishing Marvel Studio’s quippy tone while indulging in the type of serialized world-building that we take for granted today.

Looking back, it’s on par with the goofy and corny humor of Guardians of the Galaxy and Thor, and the valiant, stand up for what’s right attitude (even if it’s against your own government) of Captain America: Civil War.

It seems fitting that it’s now on Disney+, where it’s finally at home with other films of its caliber. Let’s just hope this means even more of Fox’s superhero movies are coming to Disney’s streaming service soon.

Fantastic Four: Rise of the Silver Surfer is currently streaming on Disney+.