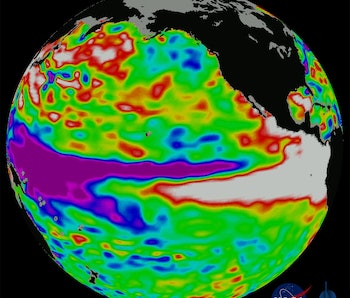 El Niño, which roughly translates to little boy in Spanish, was originally coined by fishermen off the coast of South America to signify the emergence of warm water in the Pacific Ocean near the beginning of a new year.

The events caused by El Niño, which is an abnormal warming of ocean temperatures in the eastern equatorial Pacific, can have a global impact as it triggers extreme weather conditions.

Scientists have only been able to forecast El Niño weather events around six months in advance. However, a new method could help predict the turbulent weather forecast a year early, giving the public advance warning of conditions that might contribute to extreme and dangerous weather. The previous lead time was six months.

A study, published in the journal PNAS this week, uses an approach to forecast El Niño based on the events that took place during the year before.

El Niño Southern Oscillation is one of the most well-known weather phenomenon that takes place towards the end of the year, with its effects echoing throughout the beginning of the new year. Although the exact cause behind this unusual change in temperatures is yet to be identified, the climate event is recognized by the cooling and warming of the atmosphere and surface of the waters in the central and eastern tropical Pacific Ocean.

Scientists normally measure El Niño’s upcoming forecast through anomalies in sea surface temperatures. However, a team of researchers found a correlation between the measure of complexity in the variations of air and sea surface temperatures in one calendar year and the magnitude of the events associated with El Niño in the coming year.

The scientists measured the anomalies in the temperatures through a new analysis tool called System Sample Entropy, which looks at the variation over time.

Based on this new method, the team of researchers successfully predicted nine of ten El Niño events between the years 1984 and 2018, forecasting the magnitude of the extreme weather caused by the anomaly.

The new research could also help predict other climate phenomenons, according to the study.

Extreme weather events related to El Niño have been occurring for centuries. However, recent research suggests that these events have gotten worse over time since the 1970s due to climate change. Scientists are still unable to find a direct correlation between climate change and El Niño events, but they believe that its severity was triggered by the industrial era.

The events surrounding El Niño in the year 2015 were the worst ones on record since the one that took place in 1997-98, according to reports by NASA. The 2015 El Niño resulted in increased fires across tropical rainforests in Asia and South America as it causes a decrease in rainfall across the tropics. In North America, the 2015 weather event caused flooding along the Mississippi River with three times the normal amount of rainfall.

El Niño triggers both flooding and drought in different parts of the world. In the West Coast, El Niño is often associated with increased rainfall and flooding, as well as blizzards and storms.

More like this
Science
Sep. 23, 2022
Artemis I Moon launch may be delayed again — and NASA can't do anything about it
By Doris Elín Urrutia
Science
11 hours ago
Artemis I: A fire at NASA Kennedy gives the long-delayed Moon mission its latest twist
By Doris Elín Urrutia
Science
1 hour ago
In a first, scientists show that dogs can smell when humans are stressed
By Elana Spivack
Share: