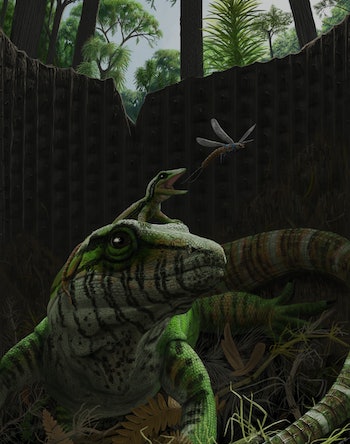 Most animals don’t spend a long time learning from their parents after birth — or at least, not in the ways we humans do. For much of the animal kingdom, there is little to no period of weaning, moving out, and promising to call their mom on Sundays.

But it turns out that the Earth’s earliest animals cared for their young for far longer than previously believed. The new insight comes from a 309 million-year-old fossil lizard adult and juvenile pair. The ancient evidence of prehistoric parental care is 40 million years older than previous fossil finds suggested.

The doting lizard parent is described in a paper published this week in the journal Nature Ecology & Evolution.

"The pair of skeletons we found are so exceptional in their preservation. We might have missed the juvenile animal had it not been so well preserved."

So, how can the scientists argue that these lizards cared for their young? The answer is rather sweet — the lizard’s tail was lovingly wrapped around its offspring, as if protecting it, the paper reveals.

The fossils, found in Nova Scotia, are varanopids, a now-extinct family of lizards that resembled modern-day monitor lizards. The find smashes the previous oldest parental care record holder — a fossil from South Africa dating to 260 million years ago. Tracing the origins of parental care is tricky work, in part because it’s rare to find preserved samples of parents and their offspring together, lead study author Hillary Maddin tells Inverse.

“Typically the bones of the animals we find are jumbled up and very broken,” says Maddin, a researcher at Carleton University.

“The pair of skeletons we found are so exceptional in their preservation. We might have missed the juvenile animal had it not been so well preserved.”

In this case, researchers found a partial skeleton of an adult and juvenile varanopid. The two were preserved together in a tree stump, which might have been a den where the parent and offspring stayed safe and spent extended time together — as parents and kids tend to do.

Now, the pair’s legacy is preserved by researchers, who dubbed the lizards Dendromaia unamakiensis.

The researchers say the evidence suggests that “parental care is more deeply rooted” within this group of ancient animals — and that the practice began even closer to the origins of all reptiles, birds, and mammals.

The new specimen can help researchers fill in knowledge gaps about the evolutionary tree and revise theories of how varanopids developed throughout their lives.

"This fossil adds a new data point to the story of when parental care may have arisen,” Maddin says. “We hope experts of that behaviour can use this specimen to better understand when it arose and what it looked like in its early phases."

Here we report on a fossil synapsid, Dendromaia unamakiensis gen. et sp. nov., from the Carboniferous period of Nova Scotia that displays evidence of parental care—approximately 40 million years earlier than the previous earliest record based on a varanopid from the Guadalupian (middle Permian) period of South Africa. The specimen, consisting of an adult and associated conspecific juvenile, is also identified as a varanopid suggesting parental care is more deeply rooted within this clade and evolved very close to the origin of Synapsida and Amniota in general. This specimen adds to growing evidence that parental care was more widespread among Palaeozoic synapsids than previously thought and further provides data permitting the identification of potential ontogeny-dependent traits within varanopids, the implications of which impact recent competing hypotheses of the phylogenetic affinities of the group.