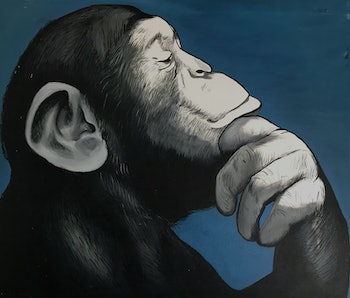 Chimpanzees, bonobos, orangutans, and gorillas are smarter than we realized. In a study published in September 2019, scientists knocked down four decades of assumptions and answered a major question about just how intelligent our primate cousins really are.

Great apes, it turns out, possess “theory of mind,” meaning that they can — like humans — attribute mental states to themselves and to others. They also understand that — very much like humans — others might believe different information than they do.

The research answers a question first posed in a 1978 paper speculating on great ape intelligence.

“Our results suggest that great apes used their own past perceptual experiences to determine an agent’s perceptual access and anticipate how the agent would behave,” the researchers wrote.

In their experiment, a human actor dressed as an ape — nicknamed “Kong” — hid an object beneath one of two identical boxes. Meanwhile, another human (not in costume) and an ape watched.

Then, one of the humans disappeared behind a barrier, while Kong returned, switched the object to the other box, before eventually removing it completely. When the other actor returned, they reached between the boxes to see where the ape expected them to search for the object.

By measuring where the apes looked using eye-tracking technology, the researchers were able to determine what the apes thought the uncostumed human was likely to do. Even though they knew there was nothing in either box, the apes’ gaze tended to fall on the original box with the object — the one that the human, who didn’t know the object had moved, would be likely to choose.

So although the apes knew the truth — that there was no object — they still seemed to understand that someone else might not know that, the researchers suggest. They also seemed to know — as humans do — that the unaware person might act based on inaccurate information.

“These results together corroborate the idea that … nonhuman animals have a theory of mind and do not simply rely on behavior rules to interpret and anticipate others’ actions,” the researchers wrote.

As 2019 draws to a close, Inverse is revisiting the year’s 20 most incredible stories about our planet. Some are gross, some are fascinating, and others are truly incredible. This has been #10. Read the original article here.