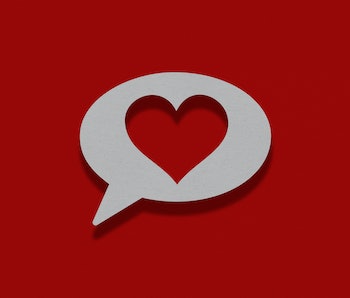 A rose by any other name would smell as sweet, but things are a bit more complicated when it comes to the names that we give emotions. Words in one language used to describe a feeling — whether it be love, fear, or anger — don’t always communicate the same human experience in another language, new research suggests.

In a study of 2,472 languages, researchers reveal that words like “love,” “surprise,” “pity,” and “fear” can have different connotations across cultures.

University of North Carolina graduate student and study author Joshua Conrad Jackson tells Inverse that this means that some words equated in translation dictionaries may not actually mean the same thing in practice, causing their true meaning to be lost.

Jackson and his colleague’s research focused in on the concept of colexification, which is when a word has more than one meaning in a given language. With the help of a colexifications database involving 2,472 languages, the team was able to construct networks of colexified emotion concepts and compare them across language families.

This study was published this week in Science.

Certain distinctions emerged: For example, in Austronesian languages — a language family spoken throughout maritime Southeast Asia, Madagascar, and the islands of the Pacific Ocean — the word “surprise” is closely associated with the experience of “fear.” Meanwhile, in Tai-Kadai languages — a language family found in mainland Southeast Asia, southern China, and northeast India — “surprise” was more closely associated with the concepts of “hope” and “want.”

The emotion colexification Jackson and his team found particularly interesting was one between “love” and “pity.” This appeared across several Austronesian and South American languages.

Overall, they found eight different colexifications for love, including: want, like, pity, good, need, happy, look for, and ask.

"This suggests to us that love may have different meanings in cultures around the world.”

“‘Love’ was more closely connected with concepts such as ‘want’ and ‘like’ in Western languages,” Jackson says.

They also found that language families with the most similar colexification networks were those that were also the most geographically close together. That suggests patterns of trade, migration, and conquest shaped how we understand emotion.

But despite the differences, a few universal patterns emerged from the analysis, too. Emotion semantics may be influenced by both cultural forces and the sensory stimuli that tickle our brains. The findings suggest that feelings of positivity and negativity, or physiological arousal, appear to be universal building blocks of emotional experiences, no matter where you are. According to the study, “happy” never means “regret,” for example.

Taken together, the findings suggest that emotional experiences stem from biology, but the way that we make meaning of these feelings varies across cultures. “Scholars since Darwin have been asking whether emotions are universal,” questioning whether primary emotions exist just like primary colors, Jackson says.

Recognizing the differences in meaning that do exist could help people from across the world understand each other better, he says.

If you’d like to compare and contrast emotional words from across languages, you can check out the database used in the study [here]((https://clics.clld.org/).

Many human languages have words for emotions such as “anger” and “fear,” yet it is not clear whether these emotions have similar meanings across languages, or why their meanings might vary. We estimate emotion semantics across a sample of 2474 spoken languages using “colexification”—a phenomenon in which languages name semantically related concepts with the same word. Analyses show significant variation in networks of emotion concept colexification, which is predicted by the geographic proximity of language families. We also find evidence of universal structure in emotion colexification networks, with all families differentiating emotions primarily on the basis of hedonic valence and physiological activation. Our findings contribute to debates about universality and diversity in how humans understand and experience emotion.

More like this
Mind and Body
November 20, 2022
Happiness study reveals a critical difference between two types of people
By Sarah Sloat
Mind and Body
6 hours ago
Nightmares have plagued humans for millennia — do we finally know how to tame them?
By Elana Spivack
Mind and Body
November 19, 2022
Feeling cold? How your thermostat affects your mood
By The Conversation, Amy Clair and Emma Baker
Related Tags
Share: