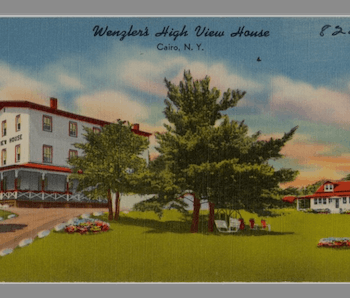 When you think of the worlds most magnificent forests, the Amazon, or perhaps California’s mighty redwoods. But the oldest forest on the planet is actually in a rather unassuming place: upstate New York.

In a quarry in Cairo, near the Catskill Mountains, researchers uncovered the earliest fossil forest to date. The fossils date back 386 million years, to the Devonian geologic period — a few million years older than the previous record holders, discovered a few years earlier in the same region.

The discovery is detailed in a paper published this week in the journal Current Biology.

The fossil forest reveals that at least two fern-like tree species previously lived in the area, cladoxylopsids and archaeopteris. But a single, unidentifiable specimen suggests there was another, third kind of tree in this forest. Possibly a lycopod, a type of giant mossy plant, the researchers suggest.

The team found extensive networks of roots — some more than 35 feet in length — with complex features, like different levels and sizes of branching. The root systems are surprisingly akin to those of modern forests, and may have been part of a bigger evolutionary transformation, the researchers suggest.

They might be on to something. The time period these tree fossils date back to was a “turning point in Earth history,” as the area’s ecology, geochemistry, carbon dioxide levels, and climate all shifted. The tree fossils found all reproduced with spores — not seeds, like modern trees — but their complex roots suggest they could represent a missing link in the area’s plants’ evolutionary history. They may reveal the moment the flora transitioned to being dominated by seed plants with complex root systems — the kinds of plants we see in upstate New York today

Curiously, the researchers also uncovered many fish fossils nearby. That suggests the forest — located in a floodplain — may have eventually been destroyed by a flood.

This isn’t the first time upstate New York has claimed the oldest forest fossils. The previously oldest-known specimens — 2-3 million years younger than the Cairo forest — were found in 2012 just 25 miles away in Gilboa, New York.

Together, the research from Gilboa and Cairo help scientists understand more about the evolution and conditions of the Earth’s early flora. The sites are similar, but have small differences — the one at Cairo seems to have been “periodically drier,” for instance.

Thanks to those details, researchers are closer to understanding what was happening to the ecology and climate in these areas at a time when the Earth underwent a seismic environmental shift.

The origin of trees and forests in the mid-Devonian (393–383 Ma) was a turning point in Earth history, marking permanent changes to terrestrial ecology, geochemical cycles, atmospheric CO2 levels, and climate. However, how all these factors interrelate remains largely unknown. From a fossil soil (palaeosol) in the Catskill region near Cairo NY, USA, we report evidence of the oldest forest (mid-Givetian) yet identified worldwide. Similar to the famous site at Gilboa, NY, we find treefern-like Eospermatopteris (Cladoxy- lopsida). However, the environment at Cairo appears to have been periodically drier. Along with a single enigmatic root system potentially belonging to a very early rhizomorphic lycopsid, we see spectacularly extensive root systems here assigned to the lignophyte group containing the genus Archaeopteris. This group appears pivotal to the subsequent evolutionary history of forests due to possession of multiple advanced features and likely relationship to subsequently dominant seed plants. Here we show that Archaeopteris had a highly advanced root system essentially comparable to modern seed plants. This suggests a unique ecological role for the group involving greatly expanded energy and resource utilization, with consequent influence on global processes much greater than expected from tree size or rooting depth alone.