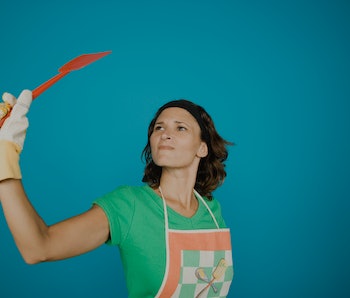 We seem to be approaching a time when it won’t be abnormal to encounter a robotic insect. Scientists at a Swiss research institute called the Ecole polytechnique fédérale de Lausanne (EPFL) have developed soft robotic insects that essentially can’t be crushed. The DEAnsect, as it’s called, can move a little over an inch per second using its artificial muscles.

It’s called the DEAnsect because it uses dielectric elastomer actuators (DEAs) to move. These actuators allow the robotic insect to move using vibrations to propel its three legs.

There are two versions of the insect. The first is powered by extremely thin wires and can be hit with a fly swatter or stepped on by a shoe without being destroyed. The second version has a small battery pack attached to it, and it seemingly could be destroyed if you stepped on it.

The DEAnsect has a microcontroller for a brain and photodiodes for eyes, and its eyes can distinguish between black and white. The researchers were able to train it to follow a black line on the ground.

“The artificial muscles consist of an elastomer membrane sandwiched between two soft electrodes,” the researchers wrote. “The electrodes are attracted to one another when a voltage is applied, compressing the membrane, which returns to its initial shape when the voltage is turned off.”

The director of EPFL’s Soft Transducers Laboratory (LMTS), Herbert Shea, said in a statement that the DEAs are able to operate using a very low voltage, which means they don’t require a very large power source.

“Our design enabled the robot, which itself weighs just 0.2 gram, to carry everything it needs on its back,” Shea said. “This technique opens up new possibilities for the broad use of DEAs in robotics, for swarms of intelligent robotic insects, for inspection or remote repairs, or even for gaining a deeper understanding of insect colonies by sending a robot to live amongst them.”

Shea’s team is working with Stanford University to create a new version of the DEAnsect that won’t need to be tethered to a power source and will be “entirely soft.”

The DEAnsect calls to mind the robotic bees Inverse wrote about in October. Those robots were also powered using thin wires, and they were created by researchers at Harvard. Those researchers are also working to develop an extra-small power source so they can rid themselves of these tiny wires.

There are many ways these tiny robot insects could be used once they’re fully developed. With the robot bees, the focus was on using them to inspect disaster areas, to spy on people and to pollinate flowers. With the DEAnsect, as Shea said, they could be used to help inspect an area that is hard for humans to get to for the purpose of repairing something or to observe insect colonies.

We think these robots could be used for more nefarious purposes, like attacking humans, but maybe we’ve just become a little too pessimistic after watching too many episodes of Black Mirror. Don’t say we didn’t warn you if it happens.