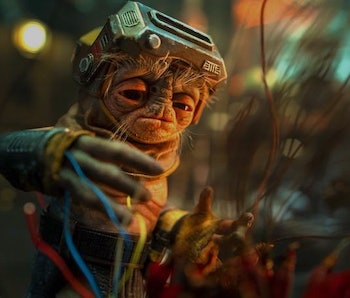 To paraphrase a popular meme: The whole internet loves Babu Frik, a lovely Star Wars alien that hacks droids in Rise of Skywalker! [5 seconds later.] We regret to inform you Babu Frik is terrible.

Fans may be divided on whether Rise of Skywalker is a good movie, but one thing everyone seems to agree on is that Babu Frik, the adorable new creature that’s sure to be an adorable Christmas present very soon, is undeniably good. I’m here to explain why everyone is wrong, and it has nothing to do with Babu himself. Instead, it’s because his role in Star Wars: Episode IX takes the place of what could have been the most powerful scene in the movie.

Warning: Light spoilers for Rise of Skywalker ahead.

First, here’s all the reasons Babu Frik is good: He’s adorable. He speaks in a funny mix of English and some alien language that’s barely understandable. He may or may not be drunk at all times. He looks like a delightful futbol hooligan who sneaks Michelob Ultras while working as a project manager for a mid-sized tech company. And he’s adorable, again.

But putting all that aside, the decision to have some puppet we’ve never heard of be the one to wipe C-3PO’s memory (essentially killing him) feels like a slight to what should be a powerful moment. Sure, Threepio gives a touching speech, but no one in the room to hear it seems to actually care. The droid’s best friend, as he calls R2-D2 in another touching scene, is lightyears away.

Speaking of R2-D2, can someone please explain why they didn’t just get R2 to wipe C-3PO’s memory instead? Was all this nonsense on Kijimi really necessary when the trashcan-shaped droid probably could have done the job just as easily?

Imagine what a tearjerker it would have been to watching R2-D2 wipe his best friend’s memory. It would have easily been the most powerful moment in the entire movie, way better than all the stuff that happens with Kylo and Rey.

Sadly, we’ll never get to see that moment, and while R2-D2 does play a key role in giving C-3PO his memory back, it’s mostly played for laughs. Overall, Artoo barely has anything to do in this movie, which instead manages to shoehorn in yet another droid while overlooking the one we already know and love.

Look, I get it, Disney needs to sell new toys, and Babu Frik is an obvious win. I just wish there was a way Rise of Skywalker could tell a captivating story about the characters we’ve obsessed over for decades while also serving as a 2-hour ad for merchandise.

More like this
Entertainment
5.3.2022 3:07 PM
Doctor Strange 2 spoilers leaked on Twitter and Reddit — here's how to avoid them
By Jake Kleinman
Entertainment
14 hours ago
Ahsoka will be different from The Mandalorian in one important way
By Alex Welch
Entertainment
5.14.2022 10:31 AM
Obi-Wan Kenobi could bring back an iconic Star Wars character
By Dais Johnston
Related Tags
Share: