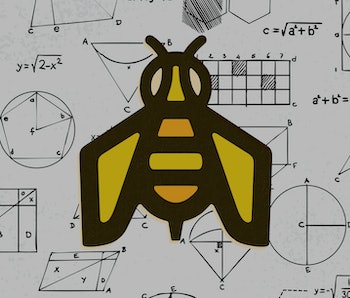 With their intricate honeycombs and careful selection of flowers to pollinate, it’s no surprise that honeybees are smart little guys — despite their tiny brains.

But bees have even more brainpower than we thought, researchers discovered in February 2019. As Inverse reported at the time, bees can do math — a finding which came as a surprise to the scientists who published their research in the journal Science Advances.

“In the current study, the bees not only succeeded in performing these processing tasks but also had to perform the arithmetic operations in working memory,” the researchers wrote.

The researchers used a Y-shaped maze to test the bees, with each arm representing the answer to a math problem — one correct, one incorrect. Correct answers yielded a reward of sugar water, while incorrect ones prompted a bitter quinine solution.

As for the math problems, the bees didn’t use the numbers and symbols we humans understand to mean addition and subtraction. Instead, the researchers taught them to understand different colors as mathematical operations.

The scientists observed 14 honeybees decide which maze path to take 100 times, and with each try, the bees became more accurate. In all, the trained bees chose correctly between 63.6 and 72.1 percent of the time. That’s significantly more correct answers than they would have produced at random.

Math is a complex cognitive process — it requires working memory, both long-term (learning the rules of the game) and short-term (picking the right answer).

Beyond just the mind-blowing fact that bees are capable of solving arithmetic problems, the research tells scientists more about the human brain. If bees can manage these problems, doing math might not be as difficult as we tend to assume.

As 2019 draws to a close, Inverse is revisiting the year’s 20 most incredible stories about our planet. Some are gross, some are fascinating, and others are truly incredible. This has been #13. Read the original article here.

More like this
Science
7.26.2022 10:00 AM
Trap-jaw ants are so powerful they should implode — scientists finally uncovered their secret
By Charles Q. Choi
Science
8.1.2022 10:30 AM
These 6-million-year-old teeth may be from Europe’s last panda species
By Elana Spivack
Science
7.31.2022 1:00 PM
How do cats co-exist with each other? The answer may lie in their gut
By Tara Yarlagadda
Related Tags
Share: