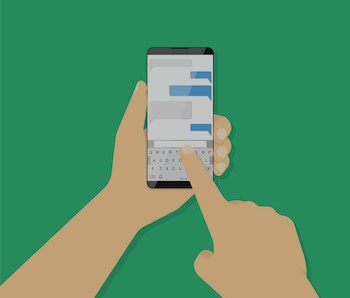 Whether you’re a college senior staring down graduation or a worker facing automation, choosing a new career that is fulfilling and lucrative can be daunting. However, it may not have to be: Recently researchers created an “atlas of career aptitude” to help people navigate professional decisions — all based on social media.

While prospective employers already scan candidates’ social media profiles to see if they’re a good fit, this tool is aimed to help hopeful employees. To do so, it analyzes Twitter text to predict the kind of job in which a person could excel.

It was presented Monday in a study published in the journal Proceedings of the National Academy of Sciences.

In the study, a team of researchers conducted a large-scale analysis of 128,279 Twitter users representing 3,513 occupations. This involved statistically analyzing the words within the user’s tweets with the IBM Watson, which uses linguistic data to infer the personality characteristics of users.

Ultimately, they wanted to see how well users matched up with the “Big Five” personality traits. These are openness, conscientiousness, extraversion, agreeableness, and emotional stability.

In turn, the researchers found that tweets — from musings about the latest election to a post about taking the dog to the vet — can predict one’s personal and professional life.

That’s because we’re not exactly snowflakes: The Twitter analysis revealed that people in similar occupations exhibit similar social-media personality profiles. This suggests that if this tool ever becomes publicly available, and you find that your tweets don’t match up with the job you have, it may be time to rethink your professional path.

The researchers also created a vocations map, which clustered occupations based on the words people used most often on Twitter.

Some patterns on the map make sense — people in the sciences and technology sectors were often clustered together, while people working in music, fashion, and the arts were clustered together as well. Seventy-percent of the time the tool was able to accurately guess what an individual’s occupation was, based on their tweets.

But not all patterns were intuitive. Contrasting occupations like nurse managers and campaigners shared similar digital signatures, likely because the jobs, while in different fields, require similar skill sets.

When it was inaccurate, the tool failed when predicting similar occupations — a school principal was confused with a superintendent; a software engineer was confused with a data scientist. This error rate was “reassuring” the authors write because even an incorrect prediction wouldn’t stray too far from someone’s ideal career match.

The future of work

But this study is one of the first to leverage social media as a potentially useful tool for career determination. If people’s personalities align with their professional life, they will be more productive and happier, the study argues. Work, the authors point out, is “a core part of human life” — it’s something that you want to get right. If people’s personalities don’t align with what their actual job is, it may be time to rethink things.

The researchers anticipate that their research could have significant applications in career guidance for new graduates, disengaged employees, career changers, and the unemployed.

This study also foreshadows a future where employees and employers increasingly rely on social media to make professional choices. That could be a good thing if you want to use your tweets like some sort of job-finding tarot cards — and a scary thing if your posts aren’t what your potential bosses are looking for.

Work is thought to be more enjoyable and beneficial to individuals and society when there is congruence between one’s personality and one’s occupation. We provide large-scale evidence that occupations have distinctive psychological profiles, which can successfully be predicted from linguistic information unobtrusively collected through social media. Based on 128,279 Twitter users representing 3,513 occupations, we automatically assess user personalities and visually map the personality profiles of different professions. Similar occupations cluster together, pointing to specific sets of jobs that one might be well suited for. Observations that contradict existing classifications may point to emerging occupations relevant to the 21st century workplace. Findings illustrate how social media can be used to match people to their ideal occupation.