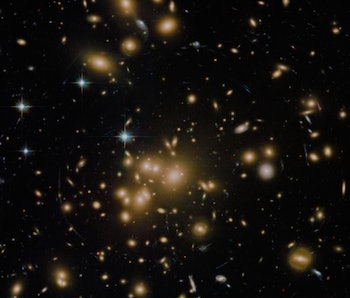 In 1933, astronomer Fritz Zwicky noticed something strange: The universe seemed to have ‘missing mass.’ Something had to account for the space in between cosmic bodies and the gravitational forces that keep them in place. Zwicky’s ‘missing mass’ is what scientists now know as dark matter.

Dark matter simultaneously answers some of the cosmos’ many mysteries and creates new puzzles for astronomers to solve. Although scientists believe that dark matter makes up 80 percent of the Universe, it has never been successfully detected in a lab. Its presence can only be inferred from its gravitational pull, rather than any kind of visual evidence since it’s… well… dark.

But there may yet be answers: A hypothetical particle known as X17 could help explain some of the mystery behind this invisible form of matter — and upend how we think about the forces that govern nature.

X17 first came on the radar 2015, when a team of Hungarian researchers announced the detection of a new particle that they said could explain how particles of dark matter interact with one another.

It was a controversial finding, but now the scientists say they have more evidence: In an October 2019 preprint paper, they describe a second experiment that provides new evidence for X17.

If real, the particle could even represent a “fifth force” of nature, according to a 2016 study.

X17 is theorized to be a subatomic particle that carries both energy and force, with a mass of around 17 million electron volts and about as heavy as 34 electrons.

As of today, we know of four forces; gravitational, electromagnetic, strong, and weak forces. Together, they govern how particles interact with each other. But if proven, X17 might force physicists to rewrite the Standard Model of particle physics — the theoretical model of particle interaction that relates to photons or particles of light.

The Standard Model doesn’t account for interaction between particles of dark matter, since dark matter does not interact with light. But X17 could be the force that governs interactions between dark matter particles.

X17, should it exist, can help scientists understand the fundamental process that makes up dark matter. However, some are skeptical of the results of the recent experiment since no other team has been able to detect this new particle in their lab.

Scientists have been hunting for dark matter for years through a series of weird, and unconventional experiments.

The Large Underground Xenon detector is one such foray. Located nearly 5,000 feet underground at the Sanford Underground Laboratory, the detector is set up to try glimpse dark matter interacting with regular matter. The detector, which cost $10 million to build, was launched in April 2013 as the most sensitive dark-matter detector in the world — unfortunately, it was unsuccessful. But the detector is getting an upgrade. When it comes back online in 2020, it will be 30 times larger, 100 times more sensitive, and hopefully more successful than its previous iteration.

The Large Hadron Collider, the world’s largest and most powerful particle accelerator, is another tool scientists have used to try find ever-elusive dark matter. In fact, scientists hope dark matter particles will be created at the collider. And although they would pass through the collider’s detectors unnoticed, the amount of energy that would be missing after their collision with other particles could indirectly reveal their existence.

The DAMA/LIBRA experiment is another particle detector hoping to find dark matter in the halo that surrounds galaxies. The detector looks for variations in the dark matter halo around Earth as it orbits the Sun, and hopes to create an annual cycle model.

Despite all these efforts, none have been successful in directly detecting dark matter — it is, for all intents and purposes, still ‘missing.’

Only time will tell if X17 truly does exist, and, if it does, whether it can help scientists in their quest to understand one of the most enduring mysteries of our cosmos.