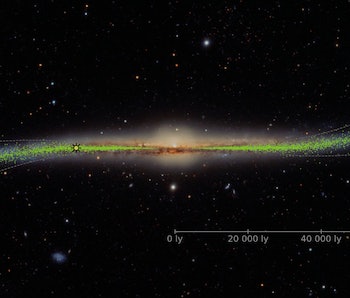 When we imagine the Milky Way, we think about the band of opal-white clouds and stars that cross our skies. Zoom out, and we see a relatively flat disc of stars, spiraling out from a center, at which lies a supermassive black hole. But that image, as beautiful as it may be, misses out a crucial detail — the galaxy is warped.

In August 2019, scientists charted the Milky Way on a larger scale than ever before, and created the most-detailed 3D map of the galaxy yet. The map was published in the journal Science.

The map uses data from 2,400 cepheids — massive young stellar bodies that burn hundreds, if not thousands of times brighter than our own Sun. It reveals that the Milky Way is warped — one end is bent upwards, while the other is bent downwards, resembling an ‘S’ shape.

Using cepheids to determine direct distances can be done at high accuracy, better than 5 percent, while other methods mostly rely on assumptions.

“The structure of the Milky Way is very hard to assess, because our Solar System is located inside the plane of our galaxy structure,” Dorota Skowron, co-author of the paper, told Inverse at the time. “We know now that this is a spiral galaxy, and this has been inferred, among others, from our extrapolation of structures seen in other galaxies.”

Astronomers previously suspected that the Milky Way warps, but this was the first attempt to map it out in the detail needed to confirm that hunch.

The map also provides a broad view of our own location in the cosmos, revealing that the bend in the Milky Way’s disc starts to form about 26,000 lightyears from the center of the Milky Way — or roughly where our Solar System is located.

More like this
Science
21 hours ago
Webb Telescope discovers an “amazing” galaxy from the edge of time
By LAURENCE TOGNETTI and Universe Today
Science
11 hours ago
Scientists now know how likely you are to be killed by space junk
By Monica Grady and The Conversation
Science
8.6.2022 11:00 AM
450 million years ago, Earth’s magnetic field almost collapsed — the results would have been apocalyptic
By CAROLYN COLLINS PETERSEN and Universe Today
Related Tags
Share: