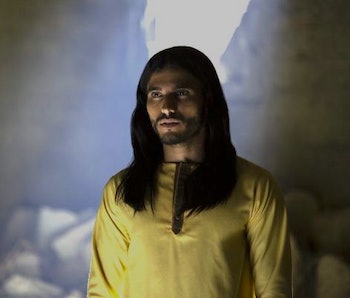 This year, the horror movie Brightburn flipped Superman’s story on its head when a young farm boy with superpowers became a monster instead of a benevolent man of steel. Now, a new Netflix series does something similar with Messiah, an upcoming show about a stranger who performs incredible miracles but may hide dark motives.

But do a little digging, and you might find out for yourself what those motives are.

As every corner of the world, from Israel to Texas, becomes enamored by al-Masih, Eve’s investigation leads her to suspect that the world has fallen for the con artist of the millennium.

So, here’s the funny thing. While al-Masih is presented as a miracle figure akin to those found in Abrahamic religions, the show may have spoiled its own twist with that name. In Muslim eschatology, “Al-Masih ad-Dajjal” (Arabic for “deceiver”) refers to a false messiah warned about by Muhammad. Like a Bond villain, he is disfigured with one blind eye.

Al-Masih isn’t named in the trailer, but he is named in articles from 2018 reporting on the show’s casting. Though Messiah makes it clear al-Masih is not to be trusted, the mystery is al-Masih’s true identity. Are his miracles tricks of science (like how Mysterio in Spider-Man: Far From Home used sophisticated AR to create fake monsters), or does al-Masih actually have supernatural powers and is, in fact, an ancient false messiah?

A Twitter user by the name @Sultaan_Mo1 quote tweeted the trailer, saying “I’m getting Dajjal vibes” and was allegedly blocked by Netflix.

Whether that’s the big twist in Messiah or not, it still might be worth checking out, because a false prophet in a Tom Clancy-esque geopolitical thriller is a truly wild show that could only exist in this age of endless streaming. If Netflix can get away with a saccharine Christmas movie where Vanessa Hudgens falls in love with a time-traveling English knight, and seriously title it The Knight Before Christmas, then Netflix can probably get by with “Brightburn but Jesus” too.

Correction 12/5/19: This article previously named the character al-Masih as “Al-Masih ad-Dajjal,” the full name of the Muslim false messiah. That is not the character’s full name in the Netflix series.