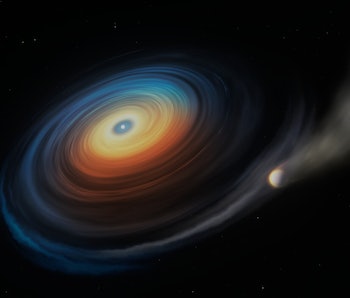 The Sun is the main source of life on Earth — but that will only last for as long as the star itself is still alive. In about five billion years, the Sun will run out of hydrogen and its mass will be reduced down to its core. That burnt-out core is known as a white dwarf, a small, dense and extremely hot star the size of a planet.

Could a white dwarf, a star essentially on its deathbed, still support the existence of another planetary body? Astronomers have been trying to answer that question for 20 years.

A chance discovery suggests it might: Astronomers have discovered the first giant planet orbiting around a white dwarf. The finding answers this cosmic mystery once and for all — and provides a glimpse into the bleak future of our own Solar System.

The discovery is detailed in a study, published in the journal Nature this week.

The star-planet pair are an unlikely duo: The study reports evidence of an exoplanet, around four times the size of the Earth, paired up with a small, Earth-sized white dwarf star.

The discovery was made during a survey of around 7,000 white dwarfs, but Boris Gänsicke, a researcher at the University of Warwick, and lead author of the study, knew there was something unusual about this particular star.

Initial data collected from the star, named WD J0914+1914, had hints of hydrogen, oxygen and sulphur — gases found in the atmosphere of planets, not stars. The findings intrigued the scientists — they took a closer look using the Very Large Telescope of the European Southern Observatory in Chile’s Atacama Desert. What they observed was strange, to say the least.

The star appeared to have a ring of accreting gas around it that matched the composition of our own Solar System’s giant planets, like Uranus and Neptune. It was the telltale sign of a planet, still orbiting the star.

“It was one of those chance discoveries,” Gänsicke tells Inverse. “Over the past 20 years, we have had a lot of observations which show that white dwarfs have remnants of planetary systems.”

This is the first time scientists have observed a planet orbiting a white dwarf star. Previously, all they had found were asteroids and other debris.

But just because the pair have survived together thus far does not mean that they are living in harmony.

The star’s scorching temperature — 28,000 degrees Celsius — is making this giant icy planet slowly evaporate. As a result, the planet, which orbits the star every 10 days, has a tail of gas trailing from it like a comet.

While it is unfortunate for the planet, the evaporating gas offers a rare opportunity to study the composition of the exoplanet’s atmosphere by taking an ultraviolet spectrograph of its evaporating tail — something that is usually too difficult to do, Gänsicke says.

The team wants to measure the ratio of hydrogen to oxygen to determine whether or not all giant planets have a relatively similar composition, and whether that composition is the same as Neptune and Uranus.

The study also provides a future look into our own Solar System, the scientists say. As the Sun nears its death and turns into a white dwarf, it might destroy its closest planets Mercury, Venus and, quite possibly, Earth. We don’t yet know which planets — if any — will be left standing.

“Whether or not the Earth will survive is still a question,” Gänsicke says. At least this potential catastrophe is 5 billion years in the future.