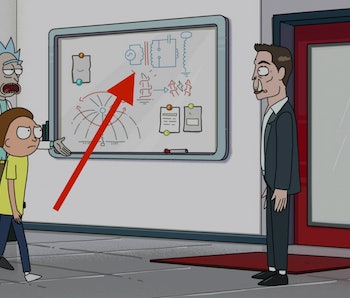 The word “Tesla” and Elon Musk’s electric car company have become nearly synonymous, but Rick and Morty is here to remind us that Tesla has been a thing since long Musk sold his first car. In Rick and Morty Season 4, Episode 3 we meet an alternate reality version of Musk named Elon Tusk (voiced by the billionaire himself), and hidden in plain sight is an Easter egg referencing the inventor who started it all, Nikola Tesla.

Is Elon Tusk even closer to becoming a mad scientist than Elon Musk? Probably, because he’s dabbling in some of Tesla’s more experimental science projects.

In the early hours of Monday morning, one Rick and Morty fan posted to the show’s subreddit community, sharing an image from “One Crew Over the Crewcoo’s Morty.” The episode mostly serves as a heist movie parody in which Rick Sanchez recruits a ragtag team of random people from across the multiverse to defeat a rogue A.I. he invented named Heistotron.

That’s where Elon Tusk comes in. A more compassionate version of Elon Musk with big tusks from an alternate reality recruited to join their team. He’s the founder and CEO of Tuskla, a company that probably makes electric cars just like the real Elon Musk’s Tesla. Drawn on Elon Tusk’s whiteboard, however, is an obvious diagram for a device known as a Tesla Coil.

Nikola Tesla — a bit of a mad scientist in his own right — was a brilliant engineer who invented all sorts of cutting edge technologies in the late-19th and early-20th centuries. To put it simply, the Tesla Coil is two open circuits connected to a spark gap that allows for the transmission of electricity through the air rather than through wires.

There aren’t many practical known uses for this technology and the go-to method for electricity transference is still through wires, which makes this little Rick and Morty Tesla Easter egg kind of a deep cut geeky in-joke that barely makes any sense. The real Elon Musk probably doesn’t mess around with Tesla Coils in any capacity despite naming his electric car company after the man who invented them.

If Tesla Coil technology could be perfected and refined, it would potentially mean wireless electricity at any scale. In theory, a Tesla Coil should be self-sustaining, but because the heated air within the gap pulls some of the electricity away, it loses energy over time and requires an external power source to keep functioning.

In a wacky sci-fi show where traveling between alternate timelines is possible, along with a myriad of other insane gadgets that could never exist, the presence of Tesla Coil on Elon Tusk’s whiteboard raises some interesting questions. If the technology could be perfected, it would mean a self-sustaining source of electric power that could flow wirelessly to anything within range.

Is Elon Tusk developing a method of wirelessly charging Tuskla cars? Is this something real-life Elon Musk considers for Teslas? Maybe after appearing in Rick and Morty, the real-life inventor will take some inspiration from his animated, alternate reality doppelganger.