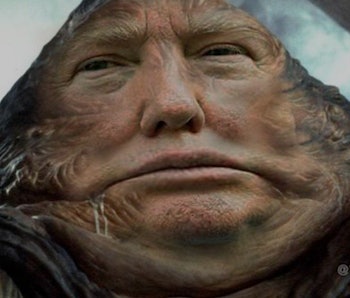 Ahead of an otherwise sleepy holiday weekend, Mark Hamill launched a snarky Twitter bomb at Donald Trump and his son Don Jr. on Wednesday, likening the President to Star Wars villain Jabba the Hutt, a repulsive, obese slug who keeps women in chains and maintains a shadowy criminal empire by forging ties with some of the shadiest creeps in the galaxy. And it isn’t the first time the actor has drawn this comparison.

Hamill’s tweet came after the President tweeted a ridiculous photo of himself on Wednesday, which depicted his face superimposed on the body of a fit prize fighter. Unsurprisingly, the President’s tweet launched an outpouring of barbs from the other side of the aisle. Don Jr. got in on the spat by sharing a photo of prominent House Democrat Adam Schiff, with his head superimposed on a spindly, dweebish body.

In response to this, Hamill directed a spate of photographs to Don Jr., addressing him as Fredo, a reference to the loathed, traitorous son of Don Vito Corleone in The Godfather Parts I and II. “Not to be outdone, can you guess which of these 4 photos was clearly NOT non-doctored? #tRUMP,” the actor wrote.

For anyone with even a passing familiarity with either Star Wars or the Godfather, it’s clear that Hamill’s not only taking pot-shots at the President’s husky frame. Hamill’s also calling out the President’s corruption by putting him the same league as a mafia kingpin and his closest sci-fi equivalent, who happens to be a villain he knows particularly well. Hamill frequently comments on the President’s Twitter rants, recently sharing a Bloomberg article that unpacks the various ongoing investigations into the President’s alleged misdeeds and joking about the First Lady’s nebulous “Be Best” anti-bullying initiative.

This isn’t the first time Hamill’s made the comparison between Trump and Jabba. In an interview with ET Canada in March 2018, the actor said of the president, “He’d probably be someone in Jabba’s palace, that’s for sure. I don’t know exactly which one.”

We know Hamill will return to the role of Luke in next month’s hotly anticipated Star Wars: The Rise of Skywalker. Given what happened in The Last Jedi, it’s fair to assume we’ll be seeing him as a Force ghost advising our heroes about how to take down Emperor Palpatine for good. Once that’s done and dusted, will the Jedi Master set his sights to draining the swamps of Dagobah? We’ll have to wait a little longer to find out.