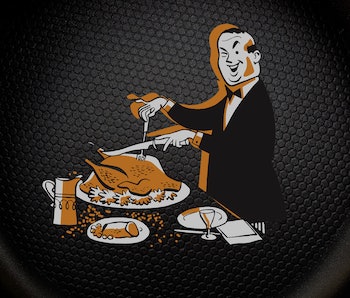 Nobel Prize aside, science might have no better annual showcase than Thanksgiving dinner. Cooking involves a myriad of different sciences, incorporating everything from enzymes to starches to metals in order to get the right taste.

There are endless ways to get the big meal right or wrong, and science offers some good guidelines.

That’s PTFE for short. You probably know it better as teflon, and it’s what makes your non-stick pan the thing you can’t do without. Invented by the chemist Roy Plunkett while working for chemical company DuPont, its creation was an accident on the way towards a better refrigerant.

It was a happy accident to say the least, considering that it landed Plunkett in the National Inventors Hall of Fame. PTFE has two remarkable qualities: it is both incredibly heat-tolerant and stick-resistant. In fact, it’s almost frictionless. The material has a friction coefficient between 0.05 and 0.1 — the third lowest known to science.

What makes PTFE so useful for cooking is its hydrophobic nature. As cookware company Misen notes, “water or water substances can’t penetrate its surface, and it has a low coefficient of friction, making it one of the slipperiest substances known to man. PTFE is so slippery that even insects can’t get a grip on its surface.”

Turkey is a bird, and for the purpose of this article, a bird is meat. But what is meat, actually? As explained by University of Bristol physicist Dr. Peter Barham, it’s muscle fibers, connective tissues, and fats. Cooking meat is a delicate dance between these three properties.

Barham explains that muscle fibers mostly consist of two proteins, myosin and actin. Humans have these as well. Myosins are sometimes called molecular motors, because they use energy to move. They work hand-in-hand with actins, which form something like a cellular conveyer belt to move along.

Heating up the muscle fibers causes the proteins to lose their original functions and shape. This is how meat toughens, which isn’t great but for the muscle, but perfect for the collagen.

“You will need to make a series of compromises to cook a ‘perfect’ turkey,” Barham warns. But he recommends between 140 and 200 °C for the outside, 55 to 58°C for the breast, and a higher temperature between 65 to 70°C for the collagen-rich wings.

Tryptophan: it’s not your turkey’s fault

All the muscle and collagen of a turkey often gets the blame for another proud Thanksgiving tradition: the post-dinner naps. The tryptophan within the turkey, we are often told, sends us into dreamland. But the culprit is hidden: in fact, it is often inside the turkey itself. It is stuffing.

Tryptophan itself is crucial. It’s one of the twenty amino acids that humans needs to function properly, but it’s not one that our bodies make. So we need to eat it. Amino acids like tryptophan help build the proteins in the our bodies, and tryptophan specifically activates serotonin, which controls the brain’s sleep/awake cycle.

“The problem with Thanksgiving dinner is that we eat so much of so many different foods that plenty of other amino acids get into our bloodstreams along with carbohydrates and fats,” says Daniel Lane of the University of North Carolina.

These carbs “cause your body to release insulin, which removes all amino acids—except tryptophan—from your blood. That means that tryptophan has no competition and can enter the brain easily, boosting serotonin levels,” says the National Sleep Foundation.

And where do those carbs come from? That’s right, the bread-heavy stuffing.

From turkey to mashed potatoes, gravy is the glue of Thanksgiving (hopefully not literally, though). It’s everywhere. As Harvard food science instructor Wylie Dufresne told Kitchin, it’s also an emulsion, which is when two liquids that don’t naturally mix end up doing just that.

How does that happen? Through an emulsifier, an active agent that gets the two to stick together.

“When we’re talking about gravy, you’re probably starting with a roux, but flour is not an emulsifier,” Duresne says. “Flour is helping to thicken the stock in your gravy. It’s increasing the viscosity of the water phase of the stock and that’s helping to stabilize the emulsion. And there are probably some proteins found in the stock, if you’re using an animal-based stock like chicken or turkey, and protein is an emulsifier. The gelatin in the stock is a pretty solid emulsifier, so you’re getting some help there.”

Gravy isn’t the only emulsifier out there. Mayonnaise, vinaigrette, and hollandaise sauce all have similar properties.

Eating Thanksgiving dinner is worth it

There are endless hassles during the holidays. Traffic, long lines, flight delays, more traffic… all conspire to make it difficult to get home. And yet Americans keep coming back to do it all over again each year. Why? For many, the food of Thanksgiving dinner could provide a psychological bond.

“We have found that comfort foods are foods which are consistently associated with those close to us,” said lead author Jordan Troisi at the time. “Thinking about or consuming these foods later then serves as a reminder of those close others.”

It wasn’t just in theory. Troisi and his team gave their subjects chicken soup, some of whom had been told was a comfort food before the study began. The chicken soup reminded them of loved ones.

“Throughout everyone’s daily lives they experience stress, often associated with our connections with others,” Troisi said. “Comfort food can serve as a ready-made, easy resource for remedying a sense of loneliness. Keeping in mind this new research, it seems humans can find a number of ways to feel like we’re connected with others.”

Keep that in mind when you’re eating leftovers for a week.

More like this
Science
Jan. 29, 2023
Does the Doomsday Clock actually mean anything? Experts weigh in
By Jon Kelvey
Science
Jan. 28, 2023
The best mystery thriller on Netflix ignores a basic fact about hydrogen energy
By Tara Yarlagadda
Science
Feb. 4, 2023
How Scientists Decide Whether Everyday Products Could Cause Cancer
By The Conversation and Brad Reisfeld
LEARN SOMETHING NEW EVERY DAY.
Related Tags
Share: