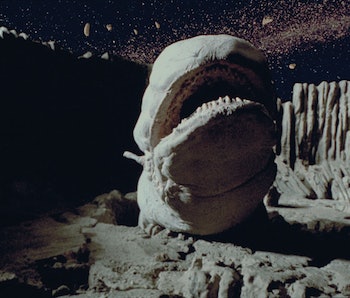 Although Rey will have her own personal journey in Star Wars: The Rise of Skywalker, that doesn’t mean she won’t be adventuring throughout the galaxy. While there’s no telling what perils she, Poe, and Finn will face in their next galaxy-hopping adventure, a new image from Episode IX seems to hint at the return of a classic Star Wars location.

A couple of months ago, a leak from Making Star Wars suggested Rey and company would face off against a sandworm, and that the encounter would unlock a new Force power for Rey. Just last week, U.K. film outlet Empire released a new photo from The Rise of Skywalker that once again hints at a setpiece brawl against a sandworm or similar creature will come to fruition.

In the image, Rey, Finn, Poe and C-3PO are all standing in close quarters. It’s hard to tell exactly who (or what) they’re facing — Finn and Rey both have their weapons at the ready — but it definitely looks like they’re in a hollow tunnel or underground pit. We know this is probably from early on in the movie; the characters’ warm weather attire suggests this scene takes place before we get to the rainy Death Star ruins or the snow near what seems to be Palpatine’s evil hideout. Maybe they’re inside a sandworm after being swallowed.

We’ve been inside a worm before in Star Wars, most memorably during the asteroid field chase in The Empire Strikes Back, where Han, Leia and the gang hide out in a “cave” that turns out to be a very large digestive tract. This big ol’ critter is known as an Exogoth, and according to Wookiepedia it could get up to 900 meters in size, so swallowing the little speeders we’ve seen Rey and friends zipping around on isn’t out of the question. Rise of Skywalker’s sandworm might be a warm-weather equivalent of this iconic Empire setpiece.

It’s also possible that our favorite characters are actually inside the famous Sarlacc pit seen in Return of the Jedi. The Sarlacc rests inside the sandy pit of Carkoon, where the great bounty hunter Boba Fett was thrown to his death during the rescue of Han Solo. We don’t know how deep a Sarlacc hole goes, and perhaps he’s been eating well and getting a whole lot bigger these last thirty years. Or, Palpatine simply cloned the Zillo Beast, a gigantic wormy monster seen in Clone Wars, to protect his various horcruxes scattered about the galaxy. Either way, the image lends itself to the idea that Rey will have yet another fight on her hands, only this one might be far more slimy.