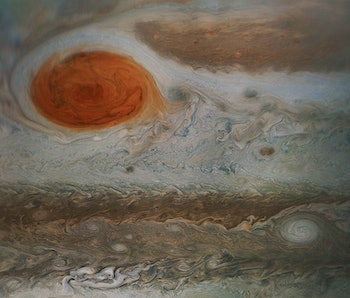 Jupiter enthusiasts, you can sleep more soundly: The theory that the planet’s famous Great Red Spot is vanishing into thin air may itself be all smoke.

The Red Spot is one of the most iconic images in astronomy. It is a high-pressure storm that has likely raged on Jupiter for hundreds of years — and since it was first observed in 1831, caught up our hearts and minds along with with it.

But in May 2019, an amateur astronomer spotted something unusual about the spot — and that got scientists worrying. A blade-like shape seemed to be flaking off from the vortex, leading some to believe that the planet’s most-significant landmark may be disintegrating into nothingness.

But don’t break out the black just yet: Reports of the Great Red Spot’s death may have been greatly exaggerated, according to Philip Marcus, a professor at University California, Berkeley. The observed flaking may not be a sign of the end, he theorizes. Instead, it may be the result of a chance encounter between two natural phenomena at the same time.

Speaking at the 72nd Annual Meeting of the American Physical Society’s Division of Fluid Dynamics on Monday, Marcus said, “We do not believe that the Red Spot is dying, and it should be around for a long time.”

New research from Marcus’ lab offers more detail on the two events that may have lead to this year’s earlier, anxiety-provoking observations.

Anticyclones attract each other, often merging with one another. The result is comparable to when a python swallows a cow — the shape of the cow’s body is still visible within the python, Marcus said.

In this case, one anticyclone traveled along the outer boundary of the Red Spot’s vortex. Meanwhile, the second encounter of a smaller cloud formation that hit the main vortex created a stagnation point where its velocity came to a halt. It then restarted, resulting in it being thrown off to the side — that jarring separation is what astronomers thought might be parts of the storm’s main vortex flaking off, Marcus said.

This may not be the first time encounters like this have happened to the Great Red Spot. Scientists might just never have noticed before, Marcus said. The sheer number of telescopes pointed at the planet have changed our understanding of its most-iconic landmark’s dynamics.

The turbulent history of the Great Red Spot

This year’s observations are not the first time scientists have had cause to worry about the Red Spot. In 2017, reports suggested that the Red Spot is shrinking in size. At one point, the storm’s cloud cover may have been the size of three Earths — now it can only accommodate one Earth.

To measure the true size of the storm, then astronomers need to focus on the vortex that lies beneath the cloud, Marcus said. That may be difficult to do from Earth. In 2017, observations by NASA’s Juno spacecraft found that the root of the Great Red Spot extends 50 to 100 times deeper than the deepest ocean on Earth.

While the world waits for more information about this iconic storm, Great Red Spot lovers can rest assured, Marcus said. The anticyclone could last for centuries unless something out of the ordinary were to occur on Jupiter. But Marcus doesn’t want to go into it too much — he doesn’t want to jinx it.

“I probably just gave it the kiss of death,” he said.