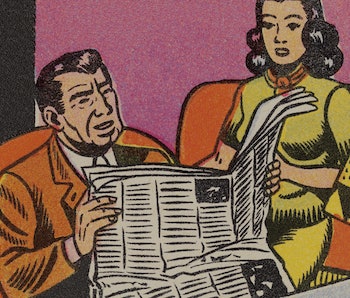 Beyond historic or vintage purposes, old newspaper don’t have much utility. No longer. In a recent study, researchers have discovered that old newspapers can act as an effective and eco-friendly substrate to grow carbon nanotubes, which are vital to creation of everything from touchscreens to 5G networks.

Researchers from Rice University in Texas and Swansea University in England have been looking for ways to perfect the growth of these incredibly small and incredibly strong molecules (which look kind of like a Chinese finger trap) for decades, but so far the high-cost materials required for building these structures and difficulty in scaling have held researchers back. A solution to this, write the authors, would be a cost-effective substrate (i.e. the material on which these structures are built) that would make the whole synthesis process more efficient.

While studies have tried to use waste products like food waste, vegetation waste, animal, bird or insect waste to synthesis these nanotubes, this study instead focuses on the substrate itself.

The study, published last month in MDPI Journal C looked at samples of newspapers from around the country to determine whether these materials would make good substrate candidates for carbon nanotubes to grow-on. These newspaper samples were treated and reduced to soot and researchers then used precise microscopes to evaluate what, if any, carbon nanotube structures had arisen.

From these newspaper samples, which included hits such as Voice of Asia, Pasadena Citizen, and the Rice Thresher, the research team found that Voice of Asia alone stood out as an effective substrate for single-walled carbon nanotube growth.

“It was interesting that only one of the three newsprint sourced facilitated the growth of [single-walled carbon nanotubes], despite the addition of identical quantities of catalyst precursor and process conditions,” the authors wrote in the study. “Standard newsprint is a paper grade that is mostly made out of thermo-mechanical pulp (TMP), pressure ground wood (PGW) and deinked pulp (DIP)”

Despite being largely composed of the same composite materials, the researchers found upon closer inspection that the Voice of Asia sample contained addition elements such as Aluminum, Silicon, Calcium, and Titanium. The authors write that this suggests the paper was sized using a type of Chinese clay called kaolin.

Which one of the study’s co-authors, Varun Shenoy Gangoli, said made the paper uniquely adept at growing these carbon nanotubes.

“Many substances including talc, calcium carbonate, and titanium dioxide can be used in sizing in papers which act as a filler to help with their levels of absorption and wear,” Gangoli said in a statement. “However it was our observation that kaolin sizing, and not calcium carbonate sizing, showed us how the growth catalyst, which in our case was iron, is affected by the chemical nature of the substrate.”

The authors write that this potential use of newspapers for growing nanotubes is important not only as a cost-effective and eco-friendly way to continue manufacturing these materials but also because it represents a continuous flow manufacturing process.

The study’s lead researcher, Bruce Brinson, said in a statement that this makes newspapers an ideal substrate for carbon nanotube growth.

“Newspapers have the benefit of being used in a roll-to-roll process in a stacked form making it an ideal candidate as a low-cost stackable 2D surface to grow carbon nanotubes,” said Brinson.

Herein, we report the successful use of newspaper as a substrate for the growth of single-walled carbon nanotubes (SWCNTs) by chemical vapor deposition (CVD) with intriguing results demonstrating that (a) the large surface area of newspaper stock allows for SWCNT growth and (b) only newspaper produced with kaolin clay sizing allowed for SWCNT growth. Kaolin newsprint was impregnated with Al2O3 and Fe(NO3)3·9H2O (as precursors to FexOy nanoparticles), and calcined (30 min at 400 °C). The subsequent char residue was loaded into a CVD chamber and used as a substrate for SWCNT growth at 750 °C, using H2, C2H2, and water vapor as the growth gas. Samples of raw carbon soot exhibiting fluorescence spectra, indicative of SWCNTs, were further evaluated by resonant Raman spectroscopy, and by transmission electron microscopy (TEM). The calcinated substrate remnants were evaluated by scanning electron microscopy (SEM) and energy dispersive X-ray spectroscopy (EDS). Experiments utilizing paper substrates produced with kaolin filler resulted in hybridized sp2–sp3 bonded carbon species. The soot was found to consist primarily of carbon nanotubes and bi-layer graphene in the form of collapsed nanotubes, also known as graphene nanoribbons (GNR).

More like this
Innovation
6.24.2022 5:00 AM
Beam-steering radio technology could help autonomous cars finally hit the road
By Sascha Brodsky
Innovation
7.1.2022 10:00 AM
Robots are ready to get touchy-feely
By Sarah Wells
Innovation
6.29.2022 6:00 PM
Can cars run on water? The science of a TikTok conspiracy theory, explained
By Andrew Moseman
Share: