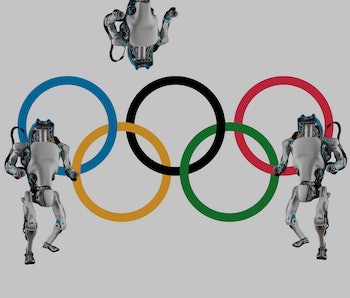 With a vertical leap of 10 feet, a robot performs a gymnastics routine no human could ever replicate. This robot does not feel pain, and it is easily repaired after a fall, so it takes risks no human would take. In the next event, a martial arts competition, we will watch two humanoid robots fight to the death — if you can call it that.

Welcome to the 2026 Robot Olympics.

There is no event planned like the one we’ve described here, but we believe this kind of event is on its way. There’s actually already been a Robot Olympics, but it was quite a bit different than what we’re describing. Back in 1990, a Robot Olympics was held in Glasgow, Scotland, and it included simple demonstrations like obstacle avoidance and pole balancing.

Robots will be featured heavily at Tokyo’s Olympics next year, including as equipment carriers and mascots, but they will not be competing.

With robots like Boston Dynamics’ Atlas already performing gymnastic feats most humans can’t imitate, it seems likely we’ll start having major competitions where these robots compete for medals and countries show off advanced robots they’ve designed. This kind of event would only feature countries that are designing advanced robots, but that’s going to end up being a lot of countries in the not-too-distant future.

We could have robots doing gymnastics, fighting, swimming, racing and more. Personally, I like the idea of robots having a shootout, but it might be risky to start giving them guns. Some of these events could be done by humanoid robots, and other events might be done by robots that were solely designed for that event.

Just in the past 10 years, we’ve made an incredible amount of progress in robotics. It seems the rate of how much we’re progressing is only speeding up. As an example of how far we’ve come, look at this video Boston Dynamics posted about a decade ago.

Robots were much simpler then, and they often had to be hooked up to a power source to work. Some of them even ran on gasoline. Now they just need batteries, and they’re good to go.

There’s no saying how far we could advance in robotics in the 2020s, but it’s quite possible that by the end of it we’ll have created things we couldn’t even imagine right now. With all of this said, robots are getting smarter and smarter, so we should probably stop kicking them and hitting them with objects. I welcome our coming robot overlords. Hear that, robots?

As 2019 draws to a close, Inverse is looking to the future. These are our 20 predictions for science and technology for the 2020s. Some are terrifying, some are fascinating, and others we can barely wait for. This has been #17. Read a related story here.

More like this
Innovation
6.21.2022 11:00 AM
No, Google’s Deepmind isn’t on the verge of human-like reasoning
By Tristan Greene and Undark
Culture
16 hours ago
8 sensational sci-fi shows and movies coming to HBO Max in July 2022
By Robin Bea
Entertainment
18 hours ago
Ms. Marvel Episode 4 release date, time, plot, cast, trailer, and Disney Plus schedule
By Jeff Spry
Related Tags
Share: