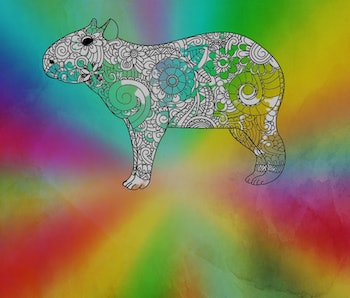 Dr. Jonathan Terry is a psychiatrist based in central California. He works in free clinics and mental health settings and is passionate about providing mental health opportunities for both the under-and-uninsured. Terry is also the creator of The Pursuit of Capyness: A Zen Capybara Coloring Book.

The capybara, the largest living rodent in the world, may not be the first thing that comes to mind when one considers mental health struggles. However, Terry points out, maybe it should: They are peaceful, and seemingly get along with everyone. Most importantly, they seem to make us humans pretty happy when we see them.

Terry, who works with people struggling with a range of hardships, noticed that capybaras simply bring a bit of joy — and decided to capitalize on that reaction by making a coloring book that could be shared with the people he serves. The following is an interview with Terry about why something as childlike as coloring book can do a lot of good, what free clinics can do, and how to think about mental health at a population level.

A version of this article also appears in the Sunday Scaries newsletter. Sign up for free to receive it on Sundays.

Hi Dr. Terry! So why did you make a coloring book of capybaras?

Capybaras, in general, but especially on the internet, are associated with being very tolerant. There are all those photos of other animals hanging out and sitting on them. Their reputation is that they get along with everyone, making the emissaries of this really nice message.

There was a day that was a particularly rough day in the world of news, and a lot of negativity online. In response to it all, I was compelled to post this photo of a capybara stretching, and the response to the photo was just unbelievable. I didn’t really expect anyone to notice, but I suppose it was the distraction a lot of people needed because it gained so many likes and shares.

I thought, Ok, that’s a little weird, posted another capybara photo, and the same thing happened. I realized we could be onto something. Maybe I could create an opportunity for people to learn more about this animal that’s known for being a peaceful animal, and it could also be an opportunity to bring some positivity to some difficult situations.

What happens after a copy is sold?

Book sales have two specific ways they can make an impact. The first is that a purchase of the book can help to fund donations of the book itself. We’re already planning on donating to a women’s and children’s shelter in the Fresno area.

If you have a population where many people might have histories of trauma, just having a creative, educational, and safe outlet can be of help. It’s even better if that outlet can be something that can be done in a group, individually, or even by a parent and their child. So, the coloring books are something that might be able to help there.

We’re also donating funds to a free clinic and needle exchange program. It’s a mobile clinic that parks and sets up shop — we’ve got two exam rooms on the bus. Its services are primarily focused on folks with addiction issues who are scared or unable to go to primary care.

They’ll also go toward sustaining an important part of my own practice: I see medical professionals and medical students suffering from burnout for free as much as I can.

When one thinks about mental health, the image of one person talking to a therapist typically comes to mind. How does that picture change when we think of helping communities who don’t have access to that type of care?

Thinking about mental health at a population level can involve everything from mobile support with case managers to having centralized brick-and-mortar hubs, where people can come in and receive any number of services.

Those are often more psycho-social — services like helping people with finances, housing, getting access to food. All of those things are essential before a person is able to show up for a therapy or psychiatry appointment. Before gains can be made there, we have to provide more basic services.

A hub can also be a community mental health clinic. One of the clinics I work at primarily sees folks who are eligible for Medicaid and Medicare, and potentially can’t afford or are too sick to be seen elsewhere.

And the hope is that funds can also help out in these sorts of settings?

The fact is, you’d have to sell a lot of books to generate significant amounts to donate. But we also hope that, more locally, book sales are going to directly translate into keeping the lights on at clinics and providing small but essential things like hand sanitizer, Band-Aids, gas for the bus, and the like.

Any potential funds we could expect are really a drop in the bucket, because most of the people who are involved with these types of endeavors, they are volunteers already. They are out there on their own time and own expense. But perhaps this is a way to lighten the load a bit, and help them as well as the populations that they are serving.