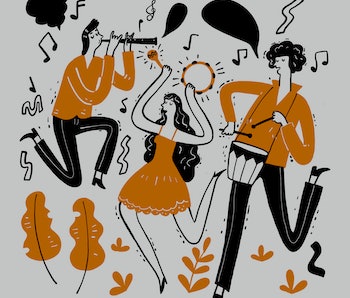 There’s a reason why music is called a universal language: Lullabies, hymns, pop songs, and dance tracks are as ubiquitous to the human experience as eating and sleeping. However, scientists have never proved music is a universal experience or why songs become the background of our lives. It’s been more of a feeling, evidenced by the cross-cultural appeal of stars like BTS and Harry Styles.

However, new research, the most comprehensive and systematic evaluation of the universality of music to date, reveals that hundreds of diverse societies are united by engaging in music in strikingly similar ways.

This study was published Thursday in Science.

“Music suffuses social life and pops up in diverse but similar contexts everywhere.”

In a five-year project that revived a centuries’ long debate over the universality of music, the research team gathered data crossing centuries and country borders.

Overall, the team evaluated the music of 315 societies and specifically examined 5,000 descriptions of songs linked back to 60 societies. The overall discography included field recordings of dance, healing, love and lullaby songs, from 30 cultural regions. They also coded the song descriptions by 60 variables, like what gender the singers of songs were and the time of day of the performance, and used those to further analyze the data.

Singh explains that gathering a huge data set — and figuring out what to do with it — wasn’t easy. To get the job done, the researchers collaborated with anthropologists, political scientists and linguists and applied novel technologies to the massive data set.

She says that one can think about the project as if her team was taking bodily measurements of every person on Earth — examining the length of the head, the width of their shoulders, the length of their tibias, etcetera — then asked: Can I reduce all of that data and divide it into much smaller variables designed to capture the important ways people differ?

Ultimately, the solution was dividing up all of the information into three more categories — arousal, religiosity, and formality — and using those to identify patterns of music and the behavior that surrounds it.

We all sing, we all dance

Previously, music was argued to be a biological adaptation because songs do things like help parents bond with newborns and bring groups of people together. However, this study suggests the purpose and practice of making music extends beyond basic biological function and is socially rooted.

Those roots underlie why music really is a universal language. The team found patterns that stretched across all of the 315 societies they examined: Each had songs with words, and all the musical systems evaluated showed signatures of tonality, suggesting a common musical language or grammar.

They also found that melodies and rhythms created by societies around the world followed similar, simple rules: Intervals between successive notes were small and relative durations of successive notes follow simple ratios.

And while music can vary in how arousing, religious or formal it is, all societies have exciting, stirring, and soothing songs. We all croon to calm crying babies, shake our bodies to a dance beat, and sing hymns to the heavens, regardless of religious inclination, political affiliation or family structures.

“Music is clearly incredibly diverse,” Singh says, “so knowing that I’m driven to try to understand whether there is an underlying logic, an echo of our common humanity that produces structural similarities everywhere.”

This study starts to clarify that universal logic and future research may indeed suggest that music may be the best way to bring people together across ideological, geographic, and political divides. Flip on some Lil Nas X and everyone might start singing along.

What is universal about music, and what varies? We built a corpus of ethnographic text on musical behavior from a representative sample of the world’s societies, as well as a discography of audio recordings. The ethnographic corpus reveals that music (including songs with words) appears in every society observed; that music varies along three dimensions (formality, arousal, religiosity), more within societies than across them; and that music is associated with certain behavioral contexts such as infant care, healing, dance, and love. The discography—analyzed through machine summaries, amateur, and expert listener ratings, and manual transcriptions—reveals that acoustic features of songs predict their primary behavioral context; that tonality is widespread, perhaps universal; that music varies in rhythmic and melodic complexity; and that elements of melodies and rhythms found worldwide follow power laws.

More like this
Science
5.14.2022 10:00 AM
This viscous liquid metal could lead to a revolutionary robotics breakthrough
By Kurt Kleiner and Knowable Magazine
Mind and Body
18 hours ago
Long Covid: 5 strategies to build resilience, according to a doctor
By Dipesh Gopal and The Conversation
Mind and Body
5.25.2022 8:14 PM
Monkeypox is spreading around the world — here's why you shouldn't panic
By Katie MacBride
Related Tags
Share: