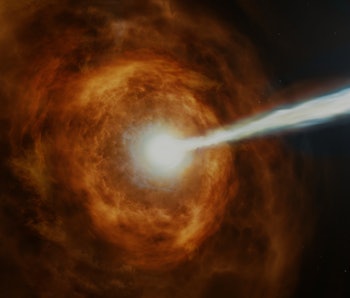 Large, heavy stars are doomed to a violent death. As a heavy star begins to run out of its fuel, the core starts to collapse onto itself, producing a lot of heat. As temperatures rise, the core will implode and completely collapse, causing a powerful explosion that is so bright it often outshines the host galaxy itself.

This stellar explosion is a gamma ray burst, a spectacular extragalactic light show for the cosmos. Now, scientists have detected the a gamma ray burst emanating from one of these explosions that seems to outshine all others.

The gamma ray burst, dubbed GRB 190114C, was a trillion times brighter than visible light, measuring between 200 and 1,000 billion electron volts. Although scientists have been able to observe the afterglow of these explosions before, this is the first time that the actual burst itself was detected.

The discovery is detailed in two papers published this week in the journal Nature.

Paul Kuin, a researcher at the University College London’s Mullard Space Science Laboratory and co-author of one of the studies, says that the initial data pinpointed which area in the sky they should be observing to catch the gamma ray burst.

“I think we were just lucky to have everything in place,” Kuin tells Inverse. “The MAGIC telescope looked at the right time, and the gamma ray burst was not too far away.”

The burst was detected around seven billion light-years away — close enough to be observed from Earth. Although gamma rays are large bursts of energy and are thus very bright, they have eluded astronomers. The bursts we know about have occurred in too-distant galaxies, or our view of them has been obscured by a galaxy or other cosmological body getting in the way.

“As an astronomer, you can’t really control what the universe is doing,” Kuin says. “But to see it happen, it confirms our knowledge of the Earth. It confirms that this is what we had expected.”

Gamma ray bursts were first discovered in the 1960s, when military satellites caught a glimpse of the high-energy explosions while on the lookout for secret nuclear weapon testing on Earth. But getting a good look has proven difficult.

For years, scientists couldn’t determine where they came from. It wasn’t until the 1990’s when they confirmed that gamma ray bursts can occur outside of our own galaxy in the wider universe.

“They’re fairly uncommon,” Kuin says. “We see them very far away but we don’t see that many because you need a really heavy star at the end of its life.”

Most of what we know about them comes from experiments here on Earth. Models of gamma rays suggest there are short-term and long-term bursts, which can last a few seconds or as much as a couple of minutes. This new observation confirms the simulations.

“It gives us confidence that we understand the physics on the Earth and how that translates to the physics out in the universe, the physics of the stars,” Kuin says. “We do learn bit by bit how everything fits together, but it’s a big universe and there’s still lots to learn.”

More like this
Science
Jan. 28, 2023
This concept spacecraft could swiftly send a one-ton spaceship to the edge of the Solar System
By Matt Williams and Universe Today
Science
Jan. 22, 2023
You need to explore this amazing map of the Milky Way
By Kiona Smith
Science
Jan. 29, 2023
Does the Doomsday Clock actually mean anything? Experts weigh in
By Jon Kelvey
LEARN SOMETHING NEW EVERY DAY.
Related Tags
Share: