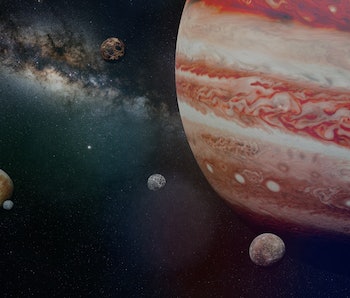 Scientists have long suspected that beneath the cracked, icy surface of Jupiter’s moon Europa lies a vast ocean of liquid water, twice as large as the oceans on Earth. And that ultra-cold water may harbor alien life.

Today, we are one step closer to confirming if water flows on Europa.

A team of researchers confirmed this week in the esteemed pages of the journal Nature Astronomy what they learned more than three years ago: There is water vapor on Europa. And in the cosmos, water can mean life.

The scientists, from NASA’s Goddard Space Flight Center, detected 5,202 pounds of water being released from Europa’s surface per second on April 26, 2016, after observing the moon for 17 days during the period between February 2016 to May 2017.

The team used a spectrograph to measure frequencies of infrared light emitted from water molecules, and successfully detected water on one night out of 17 nights of observations of Europa.

Water is the third main ingredient of life in other worlds, after chemistry and a source of energy, and is the hardest to find on other celestial bodies besides Earth.

A planned mission to the small moon, set for the year 2025 would confirm its habitability.

“While scientists have not yet detected liquid water directly, we’ve found the next best thing: water in vapor form,” Lucas Paganini, a NASA planetary scientist and lead author of the study, said in a statement.

Europa is the sixth-largest moon of the Solar System, or around the same size as our own moon, and may be our best bet on finding a similar world to Earth within our solar system. Jupiter’s moon has a relatively smooth surface like the Earth, save for a few cracks caused by its host planet’s gravitational tides. Europa’s atmosphere is mostly made up of oxygen, although it is rather too thin for humans to be able to breathe.

Although Europa — one of 79 moons that orbit Jupiter — is the sixth-closest moon to the giant planet, its magnetic field helps protect it from Jupiter’s radiation.

The new findings support the longstanding theory that plumes of water erupt from Europa. Back in 2016, a team of astronomers observing Europa through the Hubble Space Telescope found evidence for water jets shooting up to high altitudes from three different locations on the moon’s icy surface.

And evidence for water on Europa had been mounting for even longer. NASA’s Galileo spacecraft, named after renowned astronomer Galileo Galili who discovered the small moon back in 1610, found evidence of an electrically conductive fluid beneath the ice surface of Europa.

Galileo orbited Jupiter from 1995 to 2003, and found that the giant planet’s magnetic field was bent around Europa which indicated the possibility of a salt water ocean that would create a special type of magnetic field.

Any life found on Europa would be drastically different than you’d imagine on Earth, with the surface temperature at its equator reaching minus 260 degrees Fahrenheit.

Therefore, life in the form of human beings may not flourish on Europa’s terrain but small microbial life could exist within the small moon’s subsurface.

Although Europa is technically outside of the Solar System’s habitable zone, meaning it is too far from the Sun’s heat to keep its water from turning into ice, it is believed that Jupiter’s strong gravitational tide is enough to maintain Europa’s ocean in liquid form.

When is NASA next heading to Europa to look for aliens?

The next planned mission to Europa will explore the possibility of extraterrestrial life on the moon.

The Europa Clipper mission — scheduled around 2025 — will do around 45 close flybys of Europa while orbiting its host planet Jupiter, examining a different region of the moon each time. Using high resolution cameras and spectrometers, the mission will produce some of the first detailed images of this alien, yet also familiar, world.

NASA received approval to begin designing and building the spacecraft in August for the first mission aimed at exploring a moon that is not our own.

Thomas Zurbuchen, associate administrator for the Science Mission Directorate at NASA Headquarters in Washington, said the upcoming mission builds on past missions.

“We are all excited about the decision that moves the Europa Clipper mission one key step closer to unlocking the mysteries of this ocean world,” Zurbuchen said in a statement. “We are building upon the scientific insights received from the flagship Galileo and Cassini spacecraft and working to advance our understanding of our cosmic origin, and even life elsewhere.”

The spacecraft will also be equipped with an ice-penetrating radar to search for water beneath Europa’s surface, and use gravity measurements to measure its magnetic field in order to determine whether the moon does deserve its reputation as an ocean world.

Previous investigations proved the existence of local density enhancements in Europa’s atmosphere, advancing the idea of a possible origination from water plumes. These measurement strategies, however, were sensitive either to total absorption or atomic emissions, which limited the ability to assess the water content. Here we present direct searches for water vapour on Europa spanning dates from February 2016 to May 2017 with the Keck Observatory. Our global survey at infrared wavelengths resulted in non-detections on 16 out of 17 dates, with upper limits below the water abundances inferred from previous estimates. On one date (26 April 2016) we measured 2,095 ± 658 tonnes of water vapour at Europa’s leading hemisphere. We suggest that the outgassing of water vapour on Europa occurs at lower levels than previously estimated, with only rare localized events of stronger activity.

More like this
Science
Sep. 24, 2022
Super-Earths may be the best places to look for alien life
By Chris Impey and The Conversation
Science
Sep. 27, 2022
NASA is set to make the nearest flyby Jupiter's most habitable moon in 22 years
By Kiona Smith
Science
Sep. 25, 2022
Mars’ ancient lakes could help discover life on the Red Planet
By Matt Williams and Universe Today
Related Tags
Share: