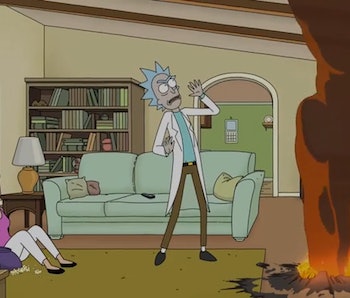 Morty Smith and his grandpa Rick Sanchez have traveled across the multiverse into the various worlds of Rick and Morty, but they could be gearing up for their most fantastical adventure yet. A new crossover with the Merge Dragons! mobile game feels like it could deliver some huge spoilers for Season 4, Episode 4, suggesting it could be the Dungeons and Dragons crossover we’re been waiting for.

In this cartoonish adventure game, players solves puzzles on grid-like maps, harnessing the power of colorful dragons along the way. Developer Gram Games and publisher Zynga Inc. announced the crossover between Merge Dragons! and Rick and Morty on Friday, and while it could just be a fun promotional stunt, we know for a fact that Morty gets a dragon based on the Season 4 trailer. So does this connection run deeper?

“In the game, Rick and Morty are playing Merge Dragons! and hack their way into the game to retrieve the Stone of Reckoning, a powerful item that opens portals to forbidden worlds,” the crossover announcement reads. “This causes the pair to crash-land in Dragonia, the world of Merge Dragons!, where fans can expect plenty of super-scientific mayhem to ensue.”

Rick and Morty often has surprising crossovers — like the recent Death Stranding ad — but this Merge Dragons! crossover adds character models for Morty and Rick, along with a unique dragon drawn in the same art style as the show.

Could this be … Morty’s dragon in Rick and Morty Season 4?

29 seconds into the Rick and Morty Season 4 trailer, a small volcano erupts into existence in the Smith family living room. “And that’s the end of the Morty gets a dragon experiment!” Rick says. When Summer asks if Rick is going to slay it, his response is perfect: “I always slay it, queen.”

We already know from the short Rick and Morty Season 4 episode descriptions revealed in October that Morty gets a dragon in Episode 4, which is called “Claw and Hoarder: Special Ricktims Morty.”

It also seems possible, based on other clips from the trailer, that Rick harnesses some kind of magic to fight fantasy monsters while Summer is dressed up like some kind of elven ranger. We don’t know for sure if these scenes happen in Episode 4 just yet, but the fantasy elements imply as much.

By the process of elimination, we know that Episode 3 appears to be some kind of action-adventure where Rick recruits a few new characters for a heist of some sort. Between the trailer, episode descriptions, and details revealed during San Diego Comic-Con, we also know that in Episode 5 — which takes place around Christmastime — Morty gets bit by a space snake and undergoes some terrifying mutations.

All signs point to Episode 4 being a fantastical adventure with magic, dragons, and enough dungeons for it to feel like a legit Dungeons & Dragons crossover. The real question here is: How much of that story is infused into the Merge Dragons! crossover? Does Morty’s dragon look like the one featured in the game’s event icon? Is the “Stone of Reckoning” from the game the same “magic” item Rick uses in the show?

We’ll find out in a little over a week.