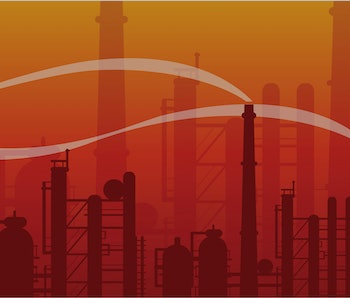 Stuck under the world’s spotlight in 2008 as the host of the Olympics, China took decisive actions to clean up its capital city’s air. Before (and after) the games, Beijing had a rep as a smog-filled urban sprawl with some of the worst air quality in the world.

But strict reductions to traffic and other sources of emissions meant that, by the time visitors were flocking to the city, the air was a lot cleaner. For the world, it was a lesson in how dramatic policies could have an outsize effect on air quality.

China took its striking approach to air quality national in 2013 — it’s the largest intervention by this highly interventionist state in pollution. And while the regulations are tough, they seem to be working pretty well, according to a new study. So well, in fact, they may have saved hundreds of thousands of lives.

The number of fine air pollution particles dropped by nearly 62 percent over a five-year period, finds the study. That suggests the Action Plan for Air Pollution Prevention and Control policies are leading to better air quality. As a result, the study argues, 370,000 lives were likely saved in 2017 alone. The findings were published this week in the journal Proceedings of the National Academy of Sciences.

Fine particulate matter of the type studied here, known as PM2.5, can make its way into humans’ lungs and bloodstreams, contributing to untold millions of unnecessary deaths around the world each year. Long-term exposure can cause or make worse cardiovascular and lung problems, especially in so-called ‘vulnerable’ groups, like children and older people. It also impairs visibility, causing the hazy effect we see hanging like a menacing cloud above highly polluted cities.

PM2.5 is the reason that cities like China’s capital, Beijing, became infamous for its terrible air quality. But September this year, news agency Reuters reported that the city is on track to drop off the list of the 200 most polluted cities in the world, composed each year by Greenpeace and IQAir. As of 2018, it’s number 122 on the list.

Even so, the concentration of PM2.5 in Beijing’s air is still more than four times higher than that which is considered safe by the World Health Organization, Reuters reports. But it has been dropping steadily since the regulations came in to force, and China is sticking to it. The city even limited firework sales during the 70th anniversary celebration of the founding of the People’s Republic in October this year as part of its commitment to the policy.

More significantly, the action plan requires cutting industrial and residential emissions across the country. It enforces strict industrial emissions standards, upgrades to industrial boilers, and condemns outdated industrial facilities to retirement. It also promotes using “clean” fuels in homes — in this case, natural gas instead of coal (which is cleaner than coal, but not exactly pristine…).

These policies seem to have driven serious air quality improvements.

“Our study confirms the effectiveness of China’s recent clean air actions,” the researchers write, and their breakdown of each regulation’s impact “provides insights into future clean air policy making in China and in other developing and polluting countries.”

In the early 2010s, the air quality outlook in China was alarming. At the start of the decade, outdoor air pollution accounted for 1.2 million premature deaths in China that year, reported The Lancet.

The cause, according to the study, was the “rapid and energy-intensive development” in the country over the preceding decades.

The problem was particularly pronounced at the beginning of 2013, the researchers say. In January that year, PM2.5 levels were 40 times higher than the WHO recommendations, The New York Times reported. In September 2013, China launched its action plan.

“With the implementation of stringent clean air actions, PM2.5 concentration across the country decreased rapidly between 2013 and 2017,” the researchers say.

But despite improvements, 64 percent of prefecture-level cities don’t meet the Chinese government’s own PM2.5 concentration standards — which are more lenient than WHO guidelines.

As a result, the policies need to stay in place — and keep getting stronger — if China wants to keep on its good trajectory, according to the researchers. Only time will tell.

From 2013 to 2017, with the implementation of the toughest-ever clean air policy in China, significant declines in fine particle (PM2.5) concentrations occurred nationwide. Here we estimate the drivers of the improved PM2.5 air quality and the associated health benefits in China from 2013 to 2017 based on a measure-specific integrated evaluation approach, which combines a bottom-up emission inventory, a chemical transport model, and epidemiological exposure response functions. The estimated national population–weighted annual mean PM2.5 concentrations decreased from 61.8 (95%CI: 53.3–70.0) to 42.0 μg/m3 (95% CI: 35.7–48.6) in 5 y, with dominant contributions from anthropogenic emission abatements. Although interannual meteorological variations could significantly alter PM2.5 concentrations, the corresponding effects on the 5-y trends were relatively small. The measure-by-measure evaluation indicated that strengthening industrial emission standards (power plants and emission-intensive industrial sectors), upgrades on industrial boilers, phasing out outdated industrial capacities, and promoting clean fuels in the residential sector were major effective measures in reducing PM2.5 pollution and health burdens. These measures were estimated to contribute to 6.6- (95% CI: 5.9–7.1), 4.4- (95% CI: 3.8– 4.9), 2.8- (95% CI: 2.5–3.0), and 2.2- (95% CI: 2.0–2.5) μg/m3 declines in the national PM2.5 concentration in 2017, respectively, and further reduced PM2.5-attributable excess deaths by 0.37 million (95% CI: 0.35–0.39), or 92% of the total avoided deaths. Our study confirms the effectiveness of China’s recent clean air actions, and the measure-by-measure evaluation provides insights into future clean air policy making in China and in other developing and polluting countries.