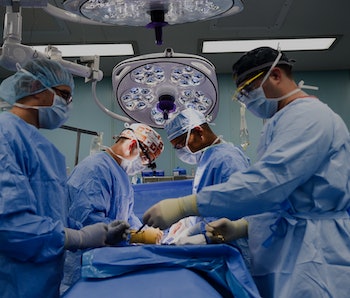 Scientists have been struggling to create a semiconductor that is stretchy, conductive and fully degradable—all at the same time. Researchers have now created a semiconductor that meets all of these requirements, and they say it could be used to monitor how one’s body is healing after surgery.

Semiconductors are essential to run electronic devices, everything from computers to smartphones. Using them to operate sensors in the body requires them to be pliable and don’t want to require another surgery just to remove one. Semiconductors are typically made of silicon, which won’t work for this purpose, so these researchers had to develop a semiconductor with entirely different materials.

These researchers were able to create a semiconductor using two degradable polymers that can stretch to twice its length and remain conductive. Furthermore, it degraded within 10 days when placed in a weak acid, and it’s completely non-toxic.

Zhenan Bao, a chemistry professor at Stanford and one of the researchers who worked on this project, tells Inverse you could use this semiconductor to monitor your recovery after muscle surgery, an organ transplant or basically any other type of surgery. The device just has to be coded to do the job you want it to do.

This kind of device allows a patient to check how they’re recovering regularly throughout the recovery process, Bao says, rather than having to go to the doctor every time they want to see how things are coming along.

Bao says the semiconductor can be powered by radio waves, which would mean through your cell phone. The device would only be operating when activated remotely, which might mean activating it when using an app or something along those lines.

“For the implantable device, it would be desirable to have them be wirelessly powered and read through a cell phone or some kind of simple handheld device,” Bao says. “The information can then be sent to the cloud for processing or to the doctor’s office.”

Bao says eventually they’ll be able to power these devices by having them “harvest energy from the body,” but they haven’t gotten there yet.

About 50 million people experience complications after surgery every year, so being able to consistently monitor a patient’s recovery without them having to come to the doctor’s office all the time could help a lot of people and likely save lives.

More like this
Science
Feb. 4, 2023
How Scientists Decide Whether Everyday Products Could Cause Cancer
By The Conversation and Brad Reisfeld
Science
Feb. 2, 2023
Scientists Created A New Type of Ice — It Could Also Exist On Distant Moons
By Rahul Rao
Science
Jan. 31, 2023
If Alien Life Exists on an Ocean World, It May Follow These Chemical Rules
By Kiona Smith
LEARN SOMETHING NEW EVERY DAY.
Related Tags
Share: