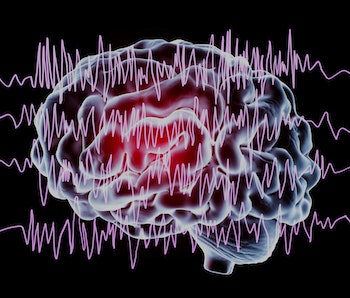 Upon first glance, sleep appears to be a restful, peaceful state. But if you were to zoom in on the sleeping brain and look at exactly what’s happening on a second to second basis, you’d find a much more tumultuous situation. Brain activity described as “micro-earthquakes” ripple though our sleeping brains, which are essential to keeping us well-rested each night.

It’s no coincidence that this activity is called that: According to a new analysis, the mathematical laws that govern the state of sleep are similar to those that underlie actual earthquakes.

Every night your brain cycles from light to deep sleep in a series of stages. This cycle happens every 90 minutes and each stage has a job to do, like keeping you well-rested or helping your brain consolidate memory. Our brains transition from sleep stage to sleep stage spontaneously — a phenomenon that Plamen Ivanov, a physicist at Boston University, says is, for now, inexplicable.

“Today, despite all the progress in sleep medicine and sleep neuroscience, we don’t know actually why we have sleep stage transitions,” Ivanov tells Inverse. “Night by night it’s the same thing, and these transitions happen at different times but with similar characteristics.”

However, Ivanov can answer this: What triggers these stages in the first place?

"We have these intense arousals, ‘micro-earthquakes’ that are essential to maintain sleep."

He’s the senior author of research published Thursday in PLOS Computational Biology, which provides an explanation for why our brains suddenly shift from one sleep stage to another. With the use of rat models, they found that activity in the sleeping brain follows patterns that are extremely rare in nature, and in neuroscience. But these patterns are found attached to one particular event: earthquakes.

“Now we see that we have these intense arousals, ‘micro-earthquakes’ that are essential to maintain sleep,” he tells Inverse.

Sleep stages are traditionally defined by specific types of brain waves; or “cortical rhythms”, that are the most common during each stage. For instance, deep sleep is defined largely by delta waves, whereas theta wave sleep is associated with earlier stages of sleep.

But if you meticulously zoomed-in one each stage, you’d see that there’s more than just that one type of wave present. Ivanov explains that, even in deep sleep, you have bursts of other rhythms apart from delta waves.

His analysis took an extremely detailed statistical look at how these “bursts” of different waves happen, and how they impact sleep stages. This led to the finding that quick bursts of theta waves are followed by an “active phase” of brain activity. Then, all of a sudden, there are bursts of delta waves, followed by a “quiescent” phase of relative inactivity.

“It’s very rare that these two types of dynamics can exist in a single process,” Ivanov explains.

But while rare, these two types of statistical patterns do occur in tandem outside of the brain: Earthquakes are also characterized by bursts of activity followed by quiet stages. The results are obviously different — earthquakes are well, earthquakes and the brain uses these dynamics to cycle through stages — but they are linked by the same sort of math.

And the math ultimately makes our lives better. Ivanov explains that these findings explain “how it’s possible to have such spontaneous transitions throughout the night between sleep stages without any external perturbations.” It’s because of the “intrinsic self-organization of the system.”

"It’s actually amazing that these processes can coexist.”

Ivanov also argues that this kind of work highlights the incredibly neural acrobatics that our brain does each time we fall asleep. These bursts of rogue waves are necessary to keep sleeping bodies in a state of deep rest and still cycle through the necessary rhythms.

“It’s actually amazing that these processes can coexist,” he says. “It’s like linking two extremes.”

You could call it tumultuous, but it’s actually extremely organized. Our brains have developed a natural sleep cycle with it’s own internal way of keeping things on schedule. Strangely, by using the same type of laws that govern the rumbling of giant tectonic plates around our home planet.

Origin and functions of intermittent transitions among sleep stages, including short awakenings and arousals, constitute a challenge to the current homeostatic framework for sleep regulation, focusing on factors modulating sleep over large time scales. Here we propose that the complex micro-architecture characterizing the sleep-wake cycle results from an underlying non-equilibrium critical dynamics, bridging collective behaviors across spatiotemporal scales. We investigate θ and δ wave dynamics in control rats and in rats with lesions of sleep-promoting neurons in the parafacial zone. We demonstrate that intermittent bursts in θ and δ rhythm exhibit a complex temporal organization, with long-range power- law correlations and a robust duality of power-law (θ-bursts, active phase) and exponential- like (δ-bursts, quiescent phase) duration distributions, typical features of non-equilibrium systems self-organizing at criticality. Crucially, such temporal organization relates to anti- correlated coupling between θ- and δ-bursts, and is independent of the dominant physiologic state and lesions, a solid indication of a basic principle in sleep dynamics.

More like this
Mind and Body
6.29.2022 6:30 PM
How music makes you feel may depend less on your brain than scientists once thought — study
By Allison Parshall
Mind and Body
7.4.2022 12:30 PM
This everyday behavior is essential to preventing heart disease
By Elana Spivack
Mind and Body
6.25.2022 1:00 PM
Why “micro workouts” can have significant mental and physical benefits
By Sam Reiss
Related Tags
Share: