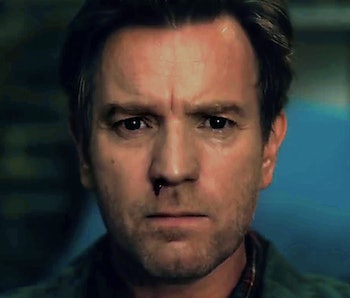 The new horror movie Doctor Sleep isn’t as abstract as its predecessor, Stanley Kubrick’s 1980 film The Shining. But it does have a weird-ass ending that can be mentally tricky if you’ve let the film’s nearly three-hour running time get the better of you. If you’re a little confused by the end of Doctor Sleep and need another prognosis, you’ve come to the right spot.

Below, we unpack the ending of Doctor Sleep.

From director Mike Flanagan, Doctor Sleep, is a feature film adaptation of the 2013 book by Stephen King, a sequel to his third novel The Shining from 1977. It is also, effectively, a sequel to Stanley Kubrick’s 1980 film adaptation, a widely-renowned horror classic that starred Shelley Duval, child actor Danny Lloyd, and Jack Nicholson as alcoholic writer Jack Torrance, who goes mad when his family moves into a lavish hotel to maintain it in the off-season.

Doctor Sleep follows an adult Danny (Ewan McGregor), who has inherited his father’s alcoholism in order to suppress the trauma of his childhood and his troublesome “Shining” psychic powers. Settling into a New Hampshire town, Danny gets clean and works part-time at a hospice. There, he develops a reputation as “Doctor Sleep,” in which he uses his powers (and a cat with a sixth sense, Azzie) to calm patients as they die.

Danny’s “Shining” also puts him in contact with a young girl, Abra (Kyliegh Curran), who fears a semi-immortal being, Rose (Rebecca Ferguson), whose nomadic band of travelers kill and feed off other psychic children. Together, Danny and Abra work to stop Rose in an effort that takes them back to where Danny’s nightmares began: The Overlook Hotel.

At the end of the film, Danny and Abra lure Rose back to the Overlook, now closed and in a state of decay. The supernatural energies at the hotel still linger, and become more powerful with the presence of all three.

Danny kills Rose by “unleashing” the old ghosts of the Overlook, ghosts who followed him into the world and who he spent his life trapping into mental “boxes.” Like Rose and her community who can live unnaturally long lives, feed off the essence of other people with the “Shining.”

That’s why they’re so attracted to Danny during his stay at the Overlook. They wanted his essence. Fear and pain, remember, makes it more potent and pure. In the original book/film, when they failed to get him, they possessed Jack in order to lure Danny to them.

Anyway. With Rose eaten up by the spirits, the spirits now want Danny and Abra. As the ghost of the Overlook itself possesses Danny, Abra lures Possessed Danny into Room 237. In a moment’s respite, the real Danny tells Abra to get out of the hotel, because he intends to blow it up and destroy the hotel for good. As Abra rushes outside, Danny forces his body into the boiler room, where the pressure valves spit out fire and leak gas. As the fire engulfs the boiler room, Danny sees the ghost of his mother caress him one last time.

Some time later, Abra is back at home with her mother. In her room, she speaks to the ghost of Danny, who tells her he is at peace. Her dad, too.

While Abra’s mother is clearly uneasy about her psychic daughter, a lingering look suggests she will learn to live with what her daughter is capable of. That’s a good thing because the ghosts of the Overlook have followed Abra into the world. In her bathroom, the old bath ghost haunts them, but Abra isn’t alone. In closing the door behind her (just as Danny did in the prologue), we’re led to believe that things will be okay.

But in the book…

Without the Overlook, the story’s final “battle” takes place at the campsite of Rose’s people, the True Knot, which resides over the Overlook’s former grounds. There is a, let’s call it, “psychic battle” with Rose that also gets assist from Billy, Danny’s new friend who helped him get sober, and — you won’t believe this — Jack, Danny’s father, whom King wrote with more sympathy in his book than Stanley Kubrick showed in the movie.

The ending of Doctor Sleep, the book, is a little happier too. Danny lives and celebrates 15 years of sobriety while Abra celebrates her 15th birthday.

While the movie made Abra recognize Danny as her uncle in a symbolic gesture (because of their Shining connection), in the book Danny was actually Abra’s uncle. They all learn that Abra’s mother is Danny’s half-sister, sharing Jack Torrance as a common parent. Due to this, Danny warns Abra that alcoholism runs in the family and asks Abra not to drink. After Abra agrees to behave, Dan returns to the hospice to comfort another dying patient.

More like this
Entertainment
6.23.2022 11:00 PM
The Black Phone ending explained: Are the ghosts in Joe Hill's story real?
By Eric Francisco
Entertainment
6.24.2022 1:00 PM
Umbrella Academy Season 3 ending explained: How it sets up Season 4's biggest crisis
By Jake Kleinman
Culture
14 hours ago
Here's everyone who lived and died in the Stranger Things Season 4 finale
By Mónica Marie Zorrilla
Share: