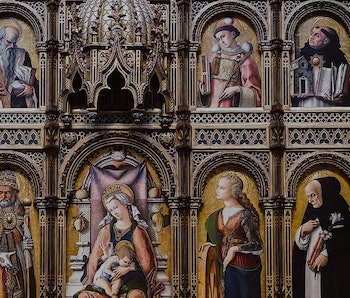 In the United States a growing number of people are secular, a trend that mirrors what’s generally happening in the global “West.” But despite shifting attitudes, new research indicates that the legacy of organized religion still permeates our social structure, collective values, and our approach to life — even if one feels disconnected from religion.

In Science a team of economists and evolutionary biologists reveal the far-reaching influence of the medieval Western Church, a branch of Christianity that became the Roman Catholic Church. They present evidence detailing how the Church’s marriage and kinship policies disrupted family patterns, broke down extended family networks, and promoted small, monogamous, nuclear families.

On Tuesday, co-author Jonathan Schulz, an economics professor at George Mason University told reporters that this study is “a story about the disillusion of kin networks and also about the tearing down of boundaries.” Because larger, insular communities were broken apart by the Church, independent family groups extended beyond traditional boundaries, setting up a familial structure still seen today.

Schultz and his colleagues analyzed societies some scientists classify as WEIRD: Western, Educated, Industrialized, Rich and Democratic. WEIRD countries make up only about 12 percent of the globe’s population, and include places like the United States and Australia. Previous research indicates that WEIRD countries tend to be more independent and analytical, as well as less obedient and conformist.

But according to Tage Rai, associate editor of Science, WEIRD countries are, well, weird. He told reporters Tuesday that most westerners are “unrepresentative of other cultures throughout the world, throughout history, and they occupy the tail end of the distribution on personality characteristics, moral values and a host of other psychological traits.”

The question is: How did these WEIRD people end up this way?

This study says the answer is the Western Church. To get to that answer, the team created a database measuring how exposed certain places were to medieval Eastern and Western churches centuries ago. They generated a kinship intensity index, looking at who people partnered with, whether they lived with extended family, and how communities were organized. Finally, they rounded up 24 psychological outcomes to compare with the other variables. The data spans thousands of years, including millions of couples, families, and communities.

This gigantic data set indicates that the Western Church, beginning in the Medieval times, instituted social policies that broke down intensive kin-based social networks. Why that happened has less to do with any Testament and more to do with morality: The authors note that Vatican records from the time show that the Church wanted to prevent incest between distant relatives, an act they perceived as an abomination to God.

This incest-stopping quest resulted in an unintended consequence: Demolishing the European family structure. Before these policies were instituted, marrying cousins, step-relatives or even in-laws was typical and marriage was used to create and sustain alliances. These alliances were the backbone of kin-based social networks.

Unlike modern couples in Western nations, who are often independent of extended families, Middle Age couples were deeply embedded in these kin-based networks. When the Church promoted choosing partners rather than relying on arranged marriages, it instituted a trend of new couples setting up their own houses away from kin — similar to the practice of starting a family seen today.

This transition, the authors argue, prompted people to became more independent, analytically oriented, less conformist, and more trusting of strangers. Some research suggests that these traits contributed to the rise of democracy and benefited the West economically: it’s hypothesized that weaker kinship networks benefit WEIRD societies by promoting creativity, innovation, and industrial progress. (Although there’s criticism that WEIRD research ignores the success seen in non-Western countries).

Importantly, the authors stress that while WEIRD psychology is linked to some benefits, one type of social network isn’t better than another. They stress that anyone who interprets this research as supporting the idea that Western psychology and history is superior, is false.

“We’re not saying that (less intensive kin-based institutions) are better – far from it,” co-author Jonathan Beauchamp, an assistant professor of economics at George Mason University, says. “There are trade-offs. Kin networks play a very important role in terms of providing a welfare safety net and providing social functions. The very loose and less intense kin institutions in the West can be very isolating.”

While more research is needed to provide the full scope as to why WEIRD societies function so differently than the rest of the world, it is clear that life today is starkly different than life before the Church gained power in Europe. That influence can explain why we live like we do today — even if one doesn’t feel a part of the Church at all.

Recent research not only confirms the existence of substantial psychological variation around the globe but also highlights the peculiarity of many Western populations. We propose that part of this variation can be traced back to the action and diffusion of the Western Church, the branch of Christianity that evolved into the Roman Catholic Church. Specifically, we propose that the Western Church’s transformation of European kinship, by promoting small, nuclear households, weak family ties, and residential mobility, fostered greater individualism, less conformity, and more impersonal pro-sociality. By combining data on 24 psychological outcomes with historical measures of both Church exposure and kinship, we find support for these ideas in a comprehensive array of analyses across countries, among European regions, and among individuals from different cultural backgrounds.

More like this
Mind and Body
8.7.2022 2:00 PM
Living near one neglected piece of urban eye candy can greatly boost mental health
By Sarah Sloat
Mind and Body
8.3.2022 11:30 AM
The brain’s memory hub may explain why some people get PTSD and others don’t — study
By Miriam Fauzia
Mind and Body
8.7.2022 10:00 AM
Nordic Diet vs. Mediterranean Diet: The health benefits of eating like a Viking, explained
By Duane Mellor, Ekavi Georgousopoulou and The Conversation
Related Tags
Share: