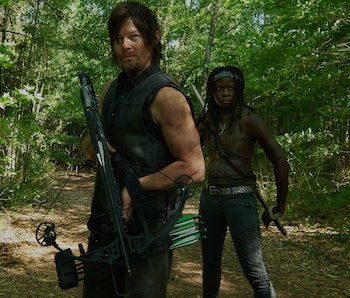 Invented by the Chinese in sixth century B.C., the crossbow is both an elegant and crude weapon of warfare. It’s a supremely efficient tool, able to shoot arrows at speed and range equal, or possibly more, to that of a traditional bow. Because of its simplicity, it made shooting arrows into bodies of meat possible for everyone! It was the GarageBand of warfare.

Prior to the crossbow’s popularity — which would end at the dawn of firearms — archers of traditional bows and arrows were held in high esteem. Because of the lifetime of training and precise skill demanded of archery, they were both soldiers and artists. Then came the crossbow archers, graffiti tagging all over their quivers.

Right now the crossbow enjoys a steady fanbase of enthusiasts who primarily use it for hunting and sport. (Or to be badass on The Walking Dead.) Here’s a brief history of the crossbow in popular culture.

14th Century: Romance of the Three Kingdoms, one of the great Chinese classical novels, features Zhuge Liang, a military strategist who invented the repeating crossbow.

1602: Twelfth Night by William Shakespeare. “O, for a stone-bow to hit him in the eye!”

1958: The 7th Voyage of Sinbad, directed by Nathan H. Juran. In the climax, Sinbad uses a giant crossbow to kill a dragon.

1977: The debut of The Huntress in DC Comics, the daughter of Batman and Catwoman. She fashions an outfit and crossbow out of her daddy’s arsenal.

1978: The Wild Geese starring Richard Burton, Roger Moore, Richard Harris, and Hardy Kruger. “I’d use a crossbow,” Kruger’s Lt. Coetzee says. And uses it he does.

1981: Before he embarked on a furious road, Mad Max encountered Wez in The Road Warrior who sported a wrist-worn mini crossbow.

1982: From the hugely profitable toy line to Saturday morning cartoons, Scarlett in G.I. Joe was a red-haired southern belle from Atlanta that sported a favored a crossbow in her missions with the Joes.

1984: The villainous Crossbow sets his crosshairs on Daredevil, in “Daredevil #204.” What’s up with bad guys and crossbows?

1987: Crossbow, a fantasy series inspired by the legend of William Tell, debuts on The Family Channel.

1991: The Cheetahmen, an unlicensed game on the NES that was a pale imitator of Teenage Mutant Ninja Turtles. Apollo, the leader of these anthropomorphic wildcats, wields a crossbow.

1997: Among her many weapons, Buffy Summers of Buffy the Vampire Slayer sported a crossbow from time to time.

1999: Turok: Rage Wars for the Nintendo 64 features the Tek Crossbow, a futuristic reimagining of the ancient weapon.

2004, again: The Resistance Crossbow in Half-Life 2 becomes a fan-favorite weapon.

2007: Link’s Crossbow Training on the Nintendo Wii was a glorified tech demo for the Wii Zapper peripheral that brandished the Wii remote into a rifle.

2010: Daryl from The Walking Dead becomes the single reason why literally anyone tunes in to AMC’s Sunday night zombie drama.

2012: Dishonored features a mini-crossbow as one of the main weapons you can acquire in the game.

2012, again: The Huntress is portrayed by Jessica De Gouw on The CW’s Arrow, and she sports Huntress’ signature crossbow.

2013: The Blue Ranger in Power Rangers Megaforce sports a bowgun infused with the spirit of a shark. It makes sense the less you think about it.

2014: Assassin’s Creed Unity, the 86th game in the Assassin’s Creed franchise, implements a wrist-mounted crossbow in its signature Phantom Blade mechanic. A bunch of cool guys on YouTube forge it IRL.