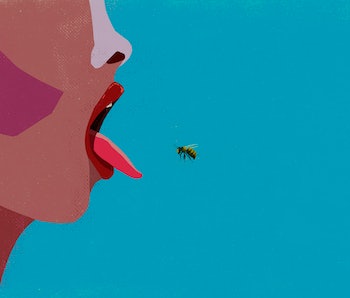 Remember those scary bees from Black Mirror? This ain’t that. Researchers at Harvard have developed a “RoboBee” that has soft artificial muscles, which allow it to crash into walls and the ground without breaking. The soft actuators, mechanisms that operate the robot’s wings, were made with a type of electroactive polymer that has elastic qualities.

Yufeng Chen, a postdoctoral fellow at Harvard John A. Paulson School of Engineering and Applied Science (SEAS) and an author of the research, said in a press statement that previous attempts to use soft actuators in this way were unsuccessful.

“There has been a big push in the field of microrobotics to make mobile robots out of soft actuators because they are so resilient,” Chen said. “However, many people in the field have been skeptical that they could be used for flying robots because the power density of those actuators simply hasn’t been high enough and they are notoriously difficult to control. Our actuator has high enough power density and controllability to achieve hovering flight.”

The polymer they used was more conductive than others, so they were able to get the power they needed. The actuator was able to get to 500 Hertz, which is around what you need to fly a microrobot in a controlled manner.

As you can see in the video of the RoboBees flying, the researchers used a sturdy but lightweight frame to keep the soft actuators from buckling.

Elizabeth Farrell Helbling, a former graduate student at SEAS and a co-author on the paper, said in a statement that there are multiple benefits to this type of design.

“One advantage of small-scale, low-mass robots is their resilience to external impacts,” Helbling said. “The soft actuator provides an additional benefit because it can absorb impact better than traditional actuation strategies. This would come in handy in potential applications such as flying through rubble for search-and-rescue missions.”

As Helbling explained, robots like this could find their way into dangerous and narrow areas to discover if there are survivors after a building collapse, during a fire or in several other scenarios. The robot being able to take a hit means it could handle whatever debris it might be struck by and that it wouldn’t be severely damaged if it ran into a wall.

Down the line, researchers will likely be able to shrink the size of these kinds of robots and make it so they’d be able to fit into even smaller spaces. There’s no telling the number of applications a robot of that kind could have. We’re just hoping they don’t become evil and crawl into our brains through our noses.

More like this
Innovation
November 24, 2022
Human-free farms could solve a major food problem
By Molly Glick
Science
November 23, 2022
Can this bird self-medicate with plants to kill parasites? Some researchers think so
By Jennifer Walter
Science
11 hours ago
Scientists just made a major stride toward a hepatitis C vaccine
By The Conversation, Lisa Eshun-Wilson and Alba Torrents de la Peña
Related Tags
Share: