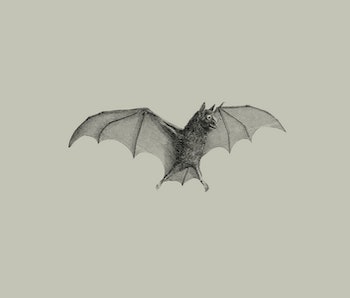 With apt timing, new research on vampire bats has revealed their social bonds are stronger than we thought.

Previous research has believed social bonds between these animals to be based purely on kinship or convenience, but new research now says they may create friendships as well.

A team of researchers from Ohio State University and the Smithsonian Tropical Research Institute (STRI) studied the creation of social bonds over a 22-month period between 17 captive female bats and their six captive-born daughters and how those bonds persisted after the bats were returned to the tree they’d been originally taken from.

The study was published Thursday in the journal Current Biology.

The study found that these female bats and their daughters developed strong social bonds during captivity in which they cared for each other’s well-being through grooming and food sharing — both with their kin and non-kin.

The bats encouraged each other to share food through selected fasting of individual bats. When researchers returned them to wild, they used remote tracking tehc to observe the social habits of both the newly released bats as well as a near equal sized group of those who had remained at the tree.

While the researchers observed that social bonds were still largely more stable in the control group, they did observe that social bonds created in the lab between captive bats were a predictor of roosting proximity after those bats had returned to the wild, suggesting that the bats still valued those relationships even after the initial need for them was removed.

In a statement, Gerald Carter, a co-author and assistant professor of evolution, ecology and organismal biology at the Ohio State University, compared this relationship to friendships you might maintain after high school.

"It’s kind of analogous to being friends in high school

“It’s kind of analogous to being friends in high school. After you graduate, and you’re released out of this structured environment, do you continue to stay in touch with those people, or do you lose touch with them? It depends on personality types and the kinds of experiences you shared. That’s essentially what we were after with this study,” Carter said.

However, while the researchers did observe some “friendship-like” behaviors between the captive bats, suggesting that the bonds created in captivity last beyond convenience, they also noticed a more concerning social patterns in captive-born offspring. Namely, they observed that the captive-born daughters struggled to fully assimilate themselves into their new home, a home that their mothers’ had been taken from but that they’d never known, and that all six daughters left the study site before the end of the eight-day observation.

In their study, researchers write that this result is “difficult to interpret” and could suggest that these captive-born daughters were unable to integrate into the group (perhaps because they lacked certain innate skills having been born in captivity) and left in search of their captive birth site instead.

To learn more about these social dynamics as well as how long the positive social bonds created in captivity will last beyond the eight-day study, the scientists say that further research using these high-resolution trackers will be essential.

“Vampire bats are an interesting model for cooperation, because you really get the sense they have to navigate cooperative relationships because there’s a potential to be cheated - which is the whole crux of the evolution of cooperation,” Carter said. “Vampire bats cooperate in some ways that are similar to how humans cooperate or other animals in complex individualized societies.”

Social bonds, maintained by mutual investments of time and energy, have greatly influenced the evolution of social cognition and cooperation in many species [e.g., 1, 2, 3, 4, 5, 6, 7, 8]. However, there are two pitfalls regarding “social bonds” as an explanation for social structure and cooperation [1, 9, 10, 11]. First, studies often incorrectly assume that frequent association implies partner fidelity based on mutual social preference, but even seemingly complex nonrandom interaction networks can emerge solely from habitat or spatial structure [12, 13, 14, 15, 16]. Second, the false appearance of partner fidelity can result from stable options in the “partner market” [1, 9, 10, 11, 17]. For instance, individuals might preferentially groom the same partner, even if the decision depends entirely on the immediate costs and benefits rather than relationship history. Given these issues, a key challenge has been testing the extent to which social structure is driven by the intrinsic relationship history versus the extrinsic physical and social environment. If stable bonds exist, they should persist even if the individuals are moved to a dramatically different physical and social environment. We tested this prediction by tracking social relationships among common vampire bats (Desmodus rotundus) moved from the lab to the wild. We show that allogrooming and food sharing among female vampire bats induced in captivity over 22 months predicted their assortativity and association rates when we subsequently tracked them in the wild with custom-made high-resolution proximity sensors. The persistence of many relationships across different physical and social environments suggests that social structure is caused by both extrinsic constraints and intrinsic partner fidelity.