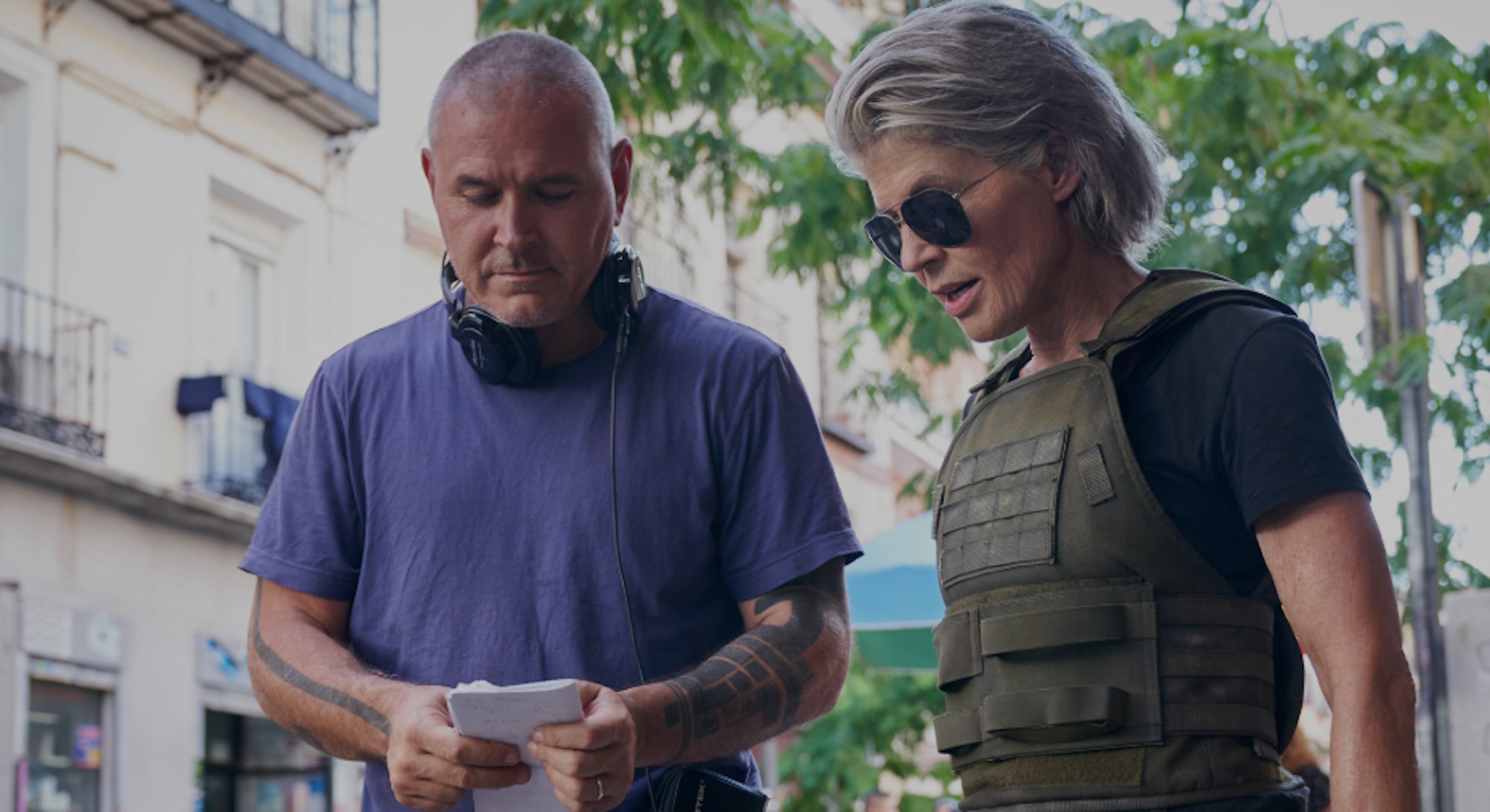 The only thing Tim Miller wanted was to not disappoint Linda Hamilton.

“That would be horrific,” the 49-year-old filmmaker tells Inverse. When we spoke a week before the Terminator sequel Terminator: Dark Fate opened in theaters, Hamilton still had not seen the movie. Besides an uncredited voice-over cameo in the almost forgotten Terminator: Salvation from 2009, Hamilton has spent close to 30 years far away from the box office killing-machine she helped unleash. Now, she’s back in Terminator: Dark Fate.

“I’m waiting to see if I accomplished my mission,” Miller says over the phone. He’s squeezed in lunch for our call, apologizing if I pick up the sound of the cantaloupe he’s chewing on the other end. “I felt like the Terminator movies were really Sarah Connor’s story. And I felt like the rest of her story hadn’t been told.”

But in 2016, everything changed for Miller. That year, he graduated to the director’s chair for his first feature film, Deadpool, the irreverent, R-rated, anti-superhero movie starring Ryan Reynolds (and released only after fans went haywire over a leaked test scene). Deadpool grossed a whopping $783 million at the box office for 20th Century Fox, spawning a sequel in 2018, with a third movie on the way. But Miller left Deadpool 2 early in pre-production, citing creative differences. That’s when he became available for Terminator: Dark Fate.

"I felt like the Terminator movies were really Sarah Connor’s story.

Like Deadpool, the Terminator films are a challenging package: There’s exhaustive story history and high expectations. And four years after the 2015 installment Terminator: Genisys vastly underperformed, the studio, Paramount Pictures, opted to do something rare in 21st century moviemaking.

Dark Fate opted for a hard fresh instead of a reboot. James Cameron returned as producer, and proceeded to wipe from the memory banks of anything “Terminator” after 1991’s T2: Judgment Day.

Set decades after T2: Judgment Day, Terminator: Dark Fate tells the story of Dani (Natalia Reyes), a Mexican factory worker. When the evil A.I. called “Legion” sends back a terminator (Gabriel Luna) from the future to kill her, Dani teams up with her protector, Grace (Mackenzie Davis), and Sarah Connor (Hamilton) to survive. Arnold Schwarzenegger also returns in a major supporting role.

“[Producer] Jim [Cameron] posed a big question,” says Miller. “Terminator 2 felt like the end of the story, but what happens when you succeed? Sarah changed the future, but we don’t know whether it was good or bad. This story answered that question, and it was most decidedly bad.”

In an interview with Inverse, Tim Miller revealed the inner workings of franchise filmmaking, “de-aging” technology, and how shooting one scene made him apologize to everyone working on set.

Exactly how much of a shadow did T2: Judgment Day cast over Terminator: Dark Fate?

I think if I was going to compare myself to Jim Cameron, I would always be found wanting. This was only my second movie and I still don’t know what the fuck I’m doing. Jim is one of the most accomplished filmmakers in Hollywood. He was quite accomplished by the time he did The Terminator. He’s just generally smarter than I am, and I was okay with that.

Second, I’m not the same. Even though I admire [T2] immensely, it’s not the way I want to make films. I’m messier. I like handheld. I like less structure and more vérité. It didn’t even occur to me to change my style to be more like Jim Cameron’s, which didn’t make Jim Cameron as happy at times as I would have liked. But it’s the way I do things.

I think that as much as you want to honor the first two films, you need to bring something new to the franchise. It can’t just be someone pretending to be Jim Cameron. I think we had the benefit of so much time had passed the world was a different place. These actors were in a different place in their lives. I just don’t think that felt very much like a ‘90s movie, and I don’t think you can do that same thing in the same movie-going environment.

Using Edward Furlong as our entryway, how did you pull off the digital de-aging seen in the movie? We’re seeing that frequently in other movies but it’s an extremely dramatic thing in Dark Fate.

I wouldn’t call this digital de-aging in the sense it’s usually used in VFX. “De-aging” is filming the real actor to make them younger, which is what they did in Terminator: Genisys and a lot of films. In our film, that wasn’t the way to go. What we did was a full head replacement for Linda, Arnold, and Eddie, and then we built the detailed CG models of their younger selves. And then we drove the facial expressions of those young models with the real actors.

Linda, Eddie, and Arnold all came in and did a session where we recorded the motions of their face, as they went through the various emotions or pieces of dialogue. We used [that] at the beginning of the movie most blatantly, but throughout the film there’s shots of the digital doubles.

In the way you use it in Dark Fate, could that have been done just five or ten years ago?

Yeah, I think it was. They did an excellent job in movies like Benjamin Button. It becomes exponentially harder when they talk. That’s when you start to see the uncanny valley effect, where you have this big chunk of gray matter whose sole purpose is to become the human face, and when it’s not right your brain senses it even if you’re not conscious why it’s off. You just feel it’s off. It kicks into the limbic system, the signal of “Get the fuck away, theres something wrong with this person.”

That is not something the technology has conquered yet. It gets better every year but we still have a ways to go. Will it get there? Absolutely. But it’s still very hard and very expensive, and if there’s any way to put a real actor in there, that’s the way to go.

We took the easier route. We originally had dialogue that quite honestly I’m glad is no longer there. It was inconsequential and I’m really happy with the way we have it.

"This was only my second movie and I still don’t know what the fuck I’m doing. — Tim Miller, director of Terminator: Dark Fate

A significant portion of the movie takes place at the Mexican-American border, including inside the migrant detention centers. You have fight scenes near kids in cages. How do you include places like that, where people are currently suffering, in a Hollywood action movie?

It was hard. It would feel disingenuous if you were going to do a movie that crossed the Mexican-American border with a Mexican national and didn’t [do that] in some way. I wouldn’t say we address those issues, because we’re not, but we include them in the story.

I’m about as far left as you can get politically, but this is not a statement movie. There’s thematics in the Terminator world, but we’re here to entertain. I wanted it to be part of the story but I didn’t want politics to take away from what it was in the story. I tried hard to find a path where you understand the horror of what this is, while at the same time, I didn’t want to vilify the people in the system who are doing their jobs. It’s unfortunate the system exists.

What was it like on set for those scenes?

When we started [shooting], when I first walked into that set and you see the extras in the cages, it was a very emotional moment for me. I got on the microphone and apologized to everyone. It was such a really shitty chapter in world history. I felt terrible about. But it has a drama that I felt was appropriate for the story.

Do you feel any ownership or responsibility in the popularity of Deadpool? I just went to a Halloween store and saw his costume everywhere.

I feel a lot of love for that character but it’s kind of like your child, in that you don’t feel responsible for their future accomplishments but you are proud when they go out and do something. The success of that movie was due to so many people and I only played a part in it. The script was great and Ryan was made to portray that character, and the comic book was great. The DNA was there. I just helped it along. I feel a sense of pride, a little bit responsible, but really I’m just part of the team. I know that sounds hokey.

What was the transition like from Deadpool into Terminator: Dark Fate?

It really wasn’t as hard as you would think. I don’t think I’m naturally a comedy director. I like to laugh and that was important with [screenwriters] Rhett [Rheese] and Paul [Wernick]. But Deadpool is funny because Ryan and Rhett and Paul are funny and I know enough to get out of the way. Terminator is my default tone. Serious and dramatic.

There’s an incredible joke about hanging drapes. Was that Rhett and Paul’s’ doing too?

Jim wrote the first part of that line, but Arnold wrote the second part. The really funny stuff. Where he says, “Don’t do it, it should be polka dots, balloons,” that’s all Arnold. The nice thing about that, and it was just a coincidence, my father was an interior designer. I worked hanging drapes and delivering furniture for a lot of my life. So that felt close to home.

After Terminator and Deadpool, you’re now a director of franchise movies. What’s your takeaway helming these big movies?

What you’re doing is telling a new story set in a world that’s established. I’m a better editor than I am a whole cloth guy. And they really are the same; Terminator’s a franchise, it’s still words on a page. Deadpool, same thing. It’s words on a page. Its worlds are established, you’re just putting a new spin on it. They’re not all that different.