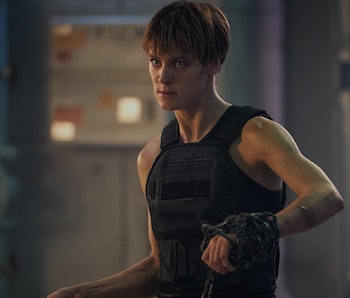 The eternal question we all ask at some point in our lives: Does Terminator: Dark Fate have a post-credits scene? We have an answer. But first, let’s ask ourselves: Why do we ask this almost every time? And how did post-credits come to be in the first place?

Because of Marvel, post-credits have exploded into what major film studios think is a guarantee that fans will pay $12-$20 a ticket to get teasers on the next time they’ll have to pay another $12-$20.

Post-credits were also a thing before Iron Man; 2001’s The Fast and the Furious, 2005’s Constantine, and even the 1987 Masters of the Universe all had post-credits scenes. But the first-ever post-credits scene can be found in George A. Romero’s pioneering 1968 zombie film Night of the Living Dead, which depicts stills of people burning bodies before cutting to a large, raging bonfire.

None of the films in the Terminator series have had post-credits scenes. The films began with 1984’s The Terminator, when post-credits were a little unheard of and when directors like James Cameron gave it their all the first time because sequels weren’t a guarantee. (They still aren’t, they’re just more expected now.) Fun fact: One classic Arnold Schwarzenegger movie did have a post-credits scene, and I guarantee you’ll never guess which one.

But in 2019, it’s Marvel’s world. And anyone looking to capture Marvel magic now shoots for the post-credits scene, even if a sequel never happens. That’s how we get 2016’s Ghostbusters, which had a post-credits scene that teased original series villain Zuul. (Ghostbusters 3, due in 2020, will not have any connections to the 2016 reboot.) Power Rangers, released in 2017, had a scene that teased the Green Ranger, and that film also does not have a sequel in development.

There are no bonus materials for Dark Fate, not even a piece of audio (like in 2008’s Cloverfield or the 2018 Halloween sequel/reboot). Director Tim Miller even confirmed as much to Fandango weeks before the film’s release, saying:

So, while it’s important to appreciate the hard-working people who make movies like Terminator: Dark Fate reality, you’re also free to leave the theater and beat parking lot traffic as soon as the movie ends. But to paraphrase a famous quote from Schwarzenegger’s T-800: You’ll be back.