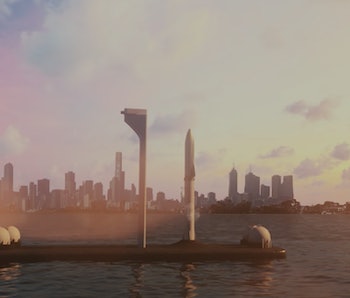 SpaceX’s Starship is coming, and it could offer flights to some of Earth’s biggest cities that last less than an hour.

The rocket, currently under construction at the company’s Florida and Texas facilities, is designed to support some of SpaceX’s most ambitious missions like a trip around the moon and a city on Mars. But one of its most interesting features could be its ability to send humans point-to-point around the Earth, cutting the 11-hours-and-50-minutes flight time of a trip between London and Hong Kong down to just 34 minutes.

Pricing is yet to be determined, but SpaceX has dropped hints about the eventual price for a ticket on the rocket. In comments shared by CNBC reporter Michael Sheetz, SpaceX president Gwynne Shotwell described these launches as a “derivative industry” for the company. During the same appearance last Friday, where she spoke on stage with investor Ron Baron at New York’s Metropolitan Opera, Shotwell stated that tickets would cost a little more than an economy-class flight, but cheaper than a first-class ticket.

As work continues on the Starship, Shotwell’s comments paint a clearer picture about what to expect from the upcoming rocket. SpaceX employees have previously stated that the company plans to use Starship to send up a satellite in 2021, host a trip around the moon in 2023, and establish a city on Mars by 2050. After CEO Elon Musk unveiled the first full-size ship prototype in September 2019, the race is on to get a prototype to orbit and unlock the next stage in the company’s development.

SpaceX Starship: how much a ticket would cost

When Musk unveiled the BFR in September 2017, the Starship’s predecessor, he explained that the cost per seat for an inter-Earth flight should be “about the same as full fare economy in an aircraft.” Shotwell’s recent comments suggest that it may cost slightly more.

So how much is that? Let’s take the New York to London route, which SpaceX says should take 29 minutes. MoneyInc found in 2017 that the route from Heathrow Airport to John F. Kennedy Airport costs $1,544 for economy and $10,735 for first class. Inverse’s own analysis found last-minute flights for $1,188 in economy and $13,643 for first class.

This chimes with the approximate figures from Sam Dinkins in the Space Review. He estimated that each flight would cost $1,055,000 to transport 853 passengers, equating to $1,200 per paid seat. Around 70 percent of that money goes on propellant, 20 percent on maintenance, and the rest on paying the crew and amortization costs.

SpaceX Starship: what you’d get with an inter-Earth flight

The Starship’s inter-Earth flights might not be a particularly comfortable experience. The Starship’s pressurized cabin space is comparable to that of an Airbus A380, and should fit around 100 people with comfortable living arrangements.

For the inter-Earth flights, Musk has suggested the rocket could hold around 1,000 people. Musk compared the flights to an inter-continental ballistic missile moving at Mach 25, or 19,182 miles per hour. It’ll move a fair amount faster than the approximately 600 mph of a jet engine, but that means SpaceX couldn’t provide amenities like bathrooms or food.

“Probably needs a restraint mechanism like Disney’s Space Mountain roller coaster,” Musk stated on Twitter in June 2019. “Would feel similar to Space Mountain in a lot of ways, but you’d exit on another continent.”

A previous version of SpaceX’s website claimed the rocket would offer New York to Los Angeles in 25 minutes, London to New York in 29 minutes, and Sydney to Singapore in 31 minutes. Musk has also suggested it could link to hyperloop, the 700 mph vacuum-sealed pod transit system, to cut travel times from the spaceport to the city center down to 10 minutes.

Musk even wants to cut back the amount of carbon going into the air with each flight. The long-term goal is to use carbon capture to collect the carbon dioxide, then use a series of processes to produce liquid oxygen and methane. This will be used to power the Raptor engines at the base of the Starship.

The Starship could send humans to distant planets and expand the species. But based on the company’s recent comments, it could transform inter-Earth travel.

More like this
Entertainment
8.5.2022 12:30 PM
For All Mankind Season 3’s space mogul is better than Elon Musk — here's why
By Ryan Britt
Innovation
7.23.2022 1:30 PM
50 years ago, a powerful satellite overcame opposition and changed how we understand Earth forever
By Allie Hutchison
Innovation
7.30.2022 11:00 PM
Here’s exactly how tech companies and apps conspire to track you 24/7
By Peter Krapp and The Conversation
Related Tags
Share: