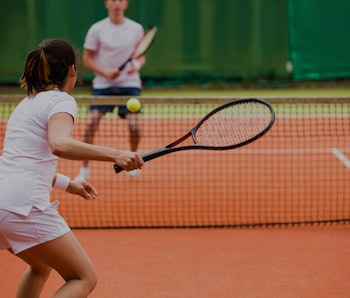 You’re several sets into a tennis match and your opponent has been gaining momentum. Will you dig in your heels to attempt a comeback, or succumb to self-doubt?

A study published Monday suggests that you’re more likely to do the latter, but that certain positive attitudes, such as self-affirmation, can combat those tendencies.

A trio of scientists from Duke University, the London Business School, New York University studied how the positive momentum of one’s opponent affects a player’s own performance, as well as their perception of their opponent’s performance.

Their research was published in the journal Proceedings of the National Academy of Sciences.

The perceived success of an opponent appeared to have more to do with a player’s stumble than their own trajectory, said Hemant Kakkar, Ph.D., assistant professor at Fuqua and research author, in a statement.

“Our experiments suggest [an opponent’s success is threatening] because people take the physical laws of momentum into their mental landscape,” Kakkar said. “For instance, they know a ball rolling downhill will keep rolling until someone applies a force to stop it. They do the same mental gymnastics or mental calculations about a competitor. They tend to think, ‘yeah, this person will keep moving up.’ Because of this, they start feeling threatened and their performance tends to suffer.”

In total, the study made 5.3 million observations and determined that while perceiving a positive trend in a competition’s play can be detrimental to your own performance, there are also ways to combat that tendency to self-destruct.

In this scenario, the researchers found that participants reported feeling less threatened by opponents with potential clerical errors in their records than they did those with true positive momentum. In fact, the level of threat perceived was nearly the same as those who thought their competitors had no momentum, thus essentially neutralizing the threat.

“Once you present people with some kind of doubt to the veracity of the rankings, such as a clerical error that affected the rankings, that alleviates some of the adverse effect of the opponent’s momentum,” Kakkar said. “We are generally motivated to think more favorably about ourselves, so when given a reason to doubt others — even a slight one — we tend to think, maybe this person isn’t actually that good, and that can change how threatened we feel.”

In a second experiment, researchers asked 1,072 participants to participate in a general intelligence competition in which they’d be told their rank at intervals throughout — and were told that a higher score would be positively rewarded. Some participants were told during the trial that their competitors were gaining momentum while others were told their competitors rank remained the same. Before being paired up with their closest competitors in a head-to-head competition toward the end of the trial, participants were divided into groups that either wrote positive affirmations about their abilities in the trial or were told to simply write their last grocery list.

The researchers found that participants who wrote down their positive affirmations reported feeling less threatened by their competition than those who didn’t, suggesting that believing in yourself really can have a positive effect on your ability to succeed at something.

To better understand this phenomenon, researchers write that future studies could focus on the inverse scenario — what happens when an opponent has negative momentum — as well as look at how the velocity of an opponent’s momentum affects a player’s performance as well.

So, next time you’re facing down your opponent, don’t forget to focus on your own strengths instead of theirs, and show them no mercy.

Jockeying and competing for higher status is an inherent feature of rank-ordered hierarchies. Despite theoretically acknowledging rank changes within hierarchies, the extant literature has ignored the role of competitors’ dynamic movements on a focal actor’s resulting behavior. By using a dynamic lens to examine these movements in competitive situations, we examine how positive change in a competitor’s rank—that is, positive status momentum—affects a focal actor’s psychology and resulting performance. We consider the real-world contexts of 5.2 million observations of chess tournaments and 117,762 observations of professional tennis players and find that a focal actor’s performance in both cognitive and physical competitions is negatively impacted when facing a competitor with positive momentum. Additionally, 4 experimental studies reveal that a competitor’s positive momentum results in the focal actor’s positive projection of the competitor’s future rank, which, in turn, increases the psychological threat for the actor. Collectively, our findings advance the social hierarchy literature by helping to elucidate the manner in which rank-ordered hierarchies are negotiated and disrupted over time.