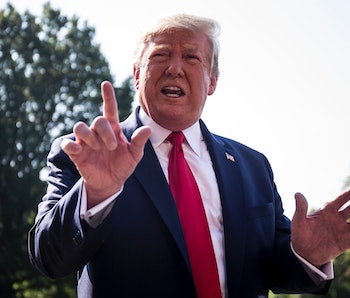 “I don’t think I would be as interested in this if I was coming at it from the outside,” he tells Inverse.

As part of an academic collective called Gaming the Mind within the Royal College of Psychiatrists, he’s long been studying the impact of video games on the mind, and has been changing the perceptions of video games with his research.

The antiquated ideas about the influence of video games on anti-social behavior have, for the most part, been disproven, but comments from President Donald Trump again brought them to the fore this year.

“There’s been concerns about the addictive potential of games since the 1980s,” Shah says. “Then, probably around the time of Mortal Kombat, there emerged concerns about video games inspiring violence in players. Those concerns have only intensified as American school shootings have increased in frequency. It was just this summer that President Donald Trump blamed video game violence for gun violence.”

Ultimately, they believe games can be a force for good, and want to promote positive mental health within the gaming community.

The following is an interview with Shah about video games and how they have been shown to be a force for good.

What drew you to this collective — is it simply because you work in the mental health space, or do you enjoy playing video games as well?

I definitely consider myself a part of the gaming community. I don’t think I would be as interested in this if I was coming at it from the outside. In some ways, that maybe adds a bit of unconscious bias because we like this hobby. But in other ways, it’s a benefit because I think a lot of mental health experts will make assumptions about video games without having the inside knowledge of how they work, what people who are into games actually do, or what the real draw of games are. And when that happens, those individuals don’t ask the right questions if they are talking to a gamer and might assume the worst if someone is playing games. So we get to come at it from a bit more of a grounded perspective.

There’s a lot of chat about the negative sides of gaming. Would you say there’s a general misconception that gaming is a hobby that can worsen your mental health, rather than something that can boost it?

There’s been concerns about the addictive potential of games since the 1980s. Then, probably around the time of Mortal Kombat, there emerged concerns about video games inspiring violence in players. Those concerns have only intensified as American school shootings have increased in frequency. It was just this summer that President Donald Trump blamed video game violence for gun violence.

But one of the misconceptions that’s definitely been thoroughly debunked is that video games cause any real world violence. Mass shooters aren’t any more likely to be video game enthusiasts, and there’s no evidence that shows any correlation between playing video games and becoming violent in real life.

That’s something our group tries to quell down whenever those accusations get thrown around. Meanwhile, regarding the issue of addiction — which I call “problematic play” because addiction is such a loaded word — I would definitely say that there are people out there who have difficulty controlling how long they game, sometimes to the extent that it gets in the way of other parts of their life. But another misconception is how common that is. It’s not common at all.

There’s also some misconceptions about games helping people, because there’s currently no strong clinical evidence that playing games makes you mentally healthier. However, it is worth noting that stress is a precipitating factor in mental illness, and it can make mental illness worse. And some people find that games can be de-stressing and be a good source of social communication. There are these benefits that at least might help in some ways.

Is it fair to say that, if we step away from the act of actually playing the game, video games can contribute to positive mental health because of the presence of the gaming community itself?

I think there needs to be more research into it, but yes, there are many anecdotal stories out there about people who are isolated socially, sometimes because of a disability or chronic illness, who find comfort and social connection by playing online games. They are receiving that not just from the game itself, but from the discord server, or Twitch community, etc. that they are a part of.

"There are so many ways of connecting online now, and those connections bring people together."

Some of the most striking stories I’ve heard center around people who are in palliative care and find community within a video game. There are cases where people’s main community were those linked to a video game, so once they pass away, there’s a lot of people online filled with grief for them.

There are so many ways of connecting online now, and those connections bring people together. Social isolation is a known risk factor for mental illness, while social support is a protective factor. So in this context, it’s likely that it is doing something useful.

The opposite side of that is escapism, where games could become a maladaptive coping mechanism for not being able to engage with real life. You have to be careful and keep yourself in check, making sure that you’re not relying on games as a means to escape your duties.

If we know that games can induce relaxation, which betters mental health, are there certain types of games people should choose to play to get that sense of relaxation?

No, and that’s the really cool thing about it. There are some research papers on the therapeutic benefits of various genres of games.

So, for example, an RPG [role-playing game] can be therapeutic because you can identify with your avatar and form social connections. And in the non-academic setting, people talk about the soothing nature of gentle games — these games are not very loud and have a gentle, rhythmic pace. Some examples are Monument Valley and Stardew Valley. Some people also find The Sims de-stressing because it can give one a sense of control they don’t have in real life.

"And that combined with the fact that it comes with an implicit story line about the progress of humanity, technology, and togetherness — makes it really nice."

And then other people can really benefit from action games like Dark Souls. That may seem counterintuitive because one might see it as an amped-up game that boosts adrenaline. But again, people are soothed by the cyclical nature of it. In the game, you keep learning until you achieve, and it gives you this real sense of accomplishment. You may not know how you are going to advance, but then you keep on trying and you do. There is this sort of parallel to exposure therapy. A situation might seem anxiety inducing, but if you continue to expose yourself to it, you can learn how to manage it.

Are there any games that you find yourself turning to when you’re feeling stressed out?

My go to for a long time was Tetris Effect. It’s a real sensory experience of visuals and vibrations, so while it’s also an amped-up game, it can be soothing. Tetris is one of those games that, when you get into the zone or flow, you stop playing automatically, and it’s a great way of zoning out. You find yourself just concentrating on this game, and that, combined with the fact that it comes with an implicit story line about the progress of humanity, technology, and togetherness — makes it really nice.

More like this
Gaming
Sep. 14, 2022
21 years ago, a Nintendo flop changed the video games industry forever
By Steven Asarch
Mind and Body
Sep. 25, 2022
Is ketamine the secret to treating depression? Mental health studies reveal its potential
By Sarah Sloat
Mind and Body
Sep. 18, 2022
Scientists know why we are so indecisive — and how to get over it
By Sarah Sloat
Related Tags
Share: