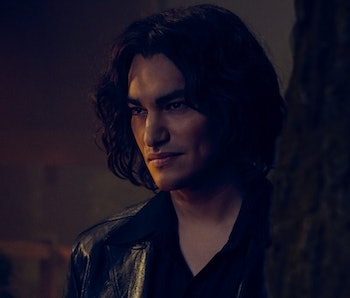 After appearing as a ghost in American Horror Story: Hotel, the serial killer Richard Ramirez, known best as the “Night Stalker”, has a much bigger role in AHS: 1984. The Night Stalker first joined Season 9 as a Satan-worshipping killer who was after Brooke. His storyline came full circle in AHS: 1984’s 100th episode, which finally saw the killer arrested and sent to prison for his crimes.

AHS isn’t a true-crime drama based on real-life events, so Ramirez’s serial killer backstory was slightly altered to fit the parameters of the show. However, Season 9, Episode 6 managed to keep the bizarre circumstances of Ramirez’s arrest intact.

Major spoilers ahead for Episode 6 of American Horror Story: 1984.

True crime has never been part of American Horror Story’s wheelhouse. After all, it’s no Mindhunter. So, when it was announced that Season 9 would include the Night Stalker as one of the main characters, it was unclear how he would fit into the horror theme of 1984.

Throughout the first five episodes of Season 9, Ramirez had his eyes set on Brooke, breaking into her Los Angeles apartment, then stalking her all the way to Camp Redwood. Yes, his fictional counterpart remained a devoted worshipper of Satan, assaulter of women, and robber. However, 1984’s version of the character was primarily concerned with killing Brooke at the behest of Montana, who blamed Brooke for the death of her brother.

But, that changed in Season 9, Episode 6. A year after the events of Camp Redwood’s second massacre, the Night Stalker and Mr. Jingles, who swore his allegiance to Satan in Episode 5, are gallivanting around Los Angeles together.

Ramirez still has a taste for killing, but Mr. Jingles is tired of the violence, of Richard’s music, and their life on the road. Feeling trapped, Mr. Jingles saw an opportunity to escape after seeing Richard’s face on the front page of a newspaper. Mr. Jingles slyly handed the newspaper over to a woman outside the grocery store. Caught red-handed exiting the store, Richard attempted to flee and carjack a woman, but he was caught by the group of bystanders and beaten before being arrested.

So, exactly how much of the story surrounding the Night Stalker’s arrest did AHS: 1984 get right? Most of it, actually. While the series doesn’t reveal how his face landed on the newspaper’s front page, the story behind how the Night Stalker was chased down by locals and subdued before the police arrived while trying to steal someone’s car. Since the circumstances of Ramirez’s arrest were so exceptional, it’s easy to assume AHS made the whole thing up.

In real life, Ramirez had become careless and the cops eventually matched his footprint and fingerprint left behind at one of his crime scenes. That’s how his picture wound up being circulated around the city and why bystanders assailed him in the midst of fleeing.

Additionally, Ramirez actually tried to run across the freeway instead of down the street like on the show, marking the first time a true crime event was downplayed onscreen. The only other major difference is that Mr. Jingles had nothing to do with his real-life arrest, of course.

The AHS: 1984 writers must’ve found the aspects of the Night Stalker’s arrest extremely fascinating, considering how little the real story was altered. In real life, the Night Stalker was convicted and sentenced to death in 1989, spending the remainder of his years on death row before dying of cancer in 2013.

However, back in the land of fiction, Ramirez escaped prison at the end of Episode 6, intent on carrying out his vengeance against Mr. Jingles. Still, the true story behind Ramirez’s arrest just goes to show that fact is sometimes stranger than fiction.