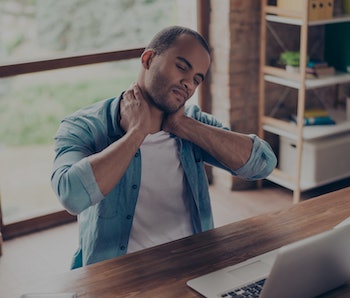 If you suffer from neck pain, you’re not alone. Spinal pain is one of the leading causes of disability worldwide and its occurrence has increased dramatically over the past 25 years. While most episodes of neck pain are likely to get better within a few months, half to three-quarters of people who have neck pain will experience repeated episodes of pain.

It’s often said there are “good and bad postures” and that specific postures can contribute to spinal pain, but this belief is not supported by scientific evidence. Indeed, research shows that poor sleep, reduced physical activity, and increased stress appear to be more important factors.

So despite attempts by health professionals to correct your posture and the use of “ergonomic” chairs, desks, keyboards, and other gadgets, chances are so-called “lifestyle factors” — such as getting enough sleep, making sure you exercise, and keeping stress to a minimum — seem to be more salient in relieving and preventing the pain in your neck.

Although beliefs about posture run deep, science is telling a very different story — and there is a strong challenge to the long-assumed role of posture as a cause of neck pain.

A recent high-quality study of more than 1,000 teenagers, for example, showed no statistically significant relationship between spinal posture and neck pain — despite there being easily identifiable postural subgroups in the study, such as those who sat slumped or those who sat upright. So yes, people do sit in positions that vary from person to person, but it appears to have nothing to do with pain. In fact, it appears from this particular study that the adolescents’ “posture” has more to do with their mood.

Research has also shown that changing the way you sit while working — by altering your workstation — with so-called “ergonomic interventions,” have little to no impact on whether a person develops neck pain. Also, there is little high-quality evidence that ergonomic interventions can lead to a speedier recovery for someone with neck pain.

In various studies, researchers have followed groups of people who don’t have neck pain along with those who only experience occasional neck pain for periods. Some people in these groups developed troublesome neck pain and the researchers looked closely at them. Those with neck pain were found to be getting less quality and quantity of sleep and were working in jobs with high strain. They were also less physically active and had depressed mood. Their bodies are essentially experiencing greater stress and they notice more “muscle tension” in their neck. Importantly, this is all before the pain has even developed.

Researchers have found that, even among children as young as 9 years old, symptoms such as tiredness and sleep difficulties — along with headaches, abdominal pain, and lower mood — were risk factors for both the occurrence and persistence of weekly neck pain when the children were monitored for four years.

The flip side of this is that having a stronger neck and enjoying exercise — even simply walking a greater number of steps each day — have all been shown to protect against getting neck pain. This, along with making sure we don’t become sleep deprived, less physically active, and stressed will hopefully manage and prevent neck pain more successfully.

So feel free to sit how you want to at your desk. If you find yourself sitting for long periods in one position, make an effort to switch it up — as one of the key things to avoid getting pain in your neck is to change positions frequently through the day.

And if you do have neck pain, get a few early nights, consider doing something relaxing — and why not go for a walk at lunchtime. Importantly, you also need to stop worrying about how you sit or walk, because science seems to show that there may be no such thing as a “bad” posture after all.

This article was originally published on The Conversation by Christian Worsfold. Read the original article here.