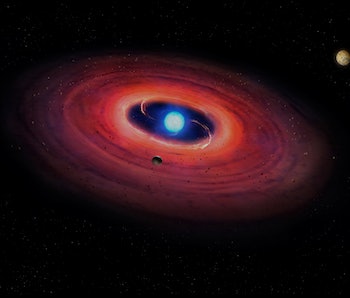 On its cosmic death bed, a dying star runs out of fuel and goes into its last stellar phase known as a white dwarf. The star collapses on itself, shredding apart its orbiting planets with its massive gravitational pull and sucking up their fragments. By observing six white dwarfs, around 200 to 665 light-years away from Earth, scientists essentially conducted an ‘autopsy’ of the exoplanets that once orbited the dying stars and found that they shared some fundamental similarities with Earth, Mars, and other rocky planets in our solar system.

A study, published in the journal Science on Thursday, is the first of its kind to capture a detailed look of the geochemistry of exoplanets. Researchers found these planets’ chemical compositions to be quite similar to that of Earth’s. The results are a hopeful indication of potentially finding other habitable worlds outside of our solar system.

“What we found is that the rocks that are in other planetary systems look a lot like rocks that we find in our solar system,” Doyle tells Inverse.

Although the team had expected these results, it was still gratifying to be able to prove it for the first time.

“We suspected as much because we had been studying rocks in these white dwarfs for a long time, and we found a lot of commonality,” Young tells Inverse.

In order to prove their hypothesis, Doyle and Young’s team observed the elements in the atmosphere of a white dwarf. Aside from hydrogen and helium, which are two chemical elements typically found in white dwarfs, there were other elements, including silicon, magnesium, carbon, and oxygen, all of which likely came from the exoplanets that had once orbited that star.

But perhaps the most important commonality that the study revealed in the composition of rocky planets in our solar system and their alien counterparts is oxidized iron. Rocks from Earth and Mars contain high levels of oxidized iron, which affects the planets’ atmospheres, cores, and the rocks found on their surfaces.

If rocks on exoplanets have the same levels of oxidation, that means these alien worlds could have the same building blocks of life — such as the density of the planets’ cores — as Earth.

Exoplanets are having a rather big year, with the Noble Prize in Physics going to the first discovery of an exoplanet back in 1995, and the detection of water vapor in an Earth-like exoplanet last month.

“The holy grail in exoplanet research is to find Earth-like planets that are potentially habitable,” Young says. “So any step you can take to demonstrate that the process that makes rocky planets in our solar system is also taking place in other systems helps answer the question, Are there other habitable planets out there?”

The study shows that white dwarfs could provide a detailed and unique way of studying these exoplanets.

“It can be a chaotic process for the planetary bodies in that solar system,” Doyle says. “Bodies around those white dwarfs get sent in that really strange trajectory, sometimes that body will hit the white dwarf.”

The chemical makeups of the rocky exoplanets observed around six of these white dwarfs can be applied to other similar systems, Young explains.

“There’s no fundamental reason why planets orbiting white dwarfs would be somehow biased,” Young says. “My anticipation would be we are looking at some typical planetary systems.”

“Hopefully we’ll be able to show that we can do much more detailed geochemical studies on these bodies than previously thought,” Doyle says.