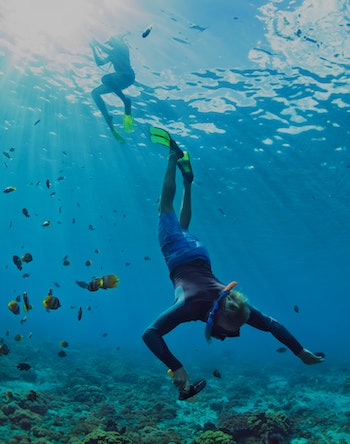 Beaches in the tropics — think Costa Rica or the Bahamas — are changing in a big way, just beneath the surface of the water.

Tropical marine areas are experiencing major shake-ups in biodiversity, according a study published Thursday in the journal Science.

Researchers identified hotspots of biodiversity shifts across the globe, finding that species networks are changing twice as fast in the ocean as they’re changing on land.

They reviewed 386 studies and more than 12 million records of abundance for over 45,000 species across plants, invertebrates, fish, birds and mammals.

But biodiversity “restructuring,” rather than species richness, is a more accurate way to describe changes over time, the researchers say. When a species dies out and is replaced by another, that change isn’t reflected by looking at the number of species in an area — yet it can shake up an entire ecosystem.

The finding that species turnover is higher in the ocean is “consistent with predictions for species responses on the basis of greater sensitivities to increased temperatures,” the researchers write.

Tropical oceans have a higher proportion of extreme changes

Some findings came as a greater surprise, like the specific trends in tropical ocean regions. In those notoriously species-rich areas, the researchers expected to see an overall drop in biodiversity. Instead, they found that studies in those areas have a higher proportion of extreme changes — richness gains, losses, and turnover.

“Hence, although we find higher magnitude changes in the tropics, this result contrasts with our prediction that we would find mostly richness losses,” the authors write.

“The tropics, which harbor most of the biological diversity on the planet, are also generally considered to be the place where biodiversity is the most threatened.”

The patterns the researchers describe add evidence to the danger of losing biodiversity across the globe.

“If these trends are maintained, then this could lead to a market restructuring of biodiversity,” the researchers write, “with potentially severe consequences for ecosystem functioning across biomes.”

Reports of a global biodiversity crisis have alarmed researchers and the public, signaling some of the major impacts of climate change.

A million species are in danger of extinction, a recent United Nations report warns. The new study could help to identify vulnerable areas for more targeted land management.

“Although the entire planet is undergoing biodiversity change, the direction and magnitude of change differs across geographic regions,” the authors write.

“Our study provides an important criterion for targeting conservation action: a global map of current rates of biodiversity change.”

Human activities are fundamentally altering biodiversity. Projections of declines at the global scale are contrasted by highly variable trends at local scales, suggesting that biodiversity change may be spatially structured. Here, we examined spatial variation in species richness and composition change using more than 50,000 biodiversity time series from 239 studies and found clear geographic variation in biodiversity change. Rapid compositional change is prevalent, with marine biomes exceeding and terrestrial biomes trailing the overall trend. Assemblage richness is not changing on average, although locations exhibiting increasing and decreasing trends of up to about 20% per year were found in some marine studies. At local scales, widespread compositional reorganization is most often decoupled from richness change, and biodiversity change is strongest and most variable in the oceans.