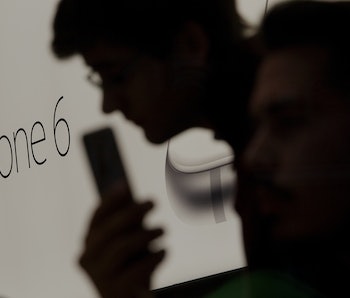 Apple just announced the next generation of iPhones today, which, in keeping with normal naming conventions, will be named the iPhone 6s and 6s Plus. They have all the improved bells and whistles that years of research and development have found that consumers crave, like the new 3D Touch feature. They’re also still frickin’ slabs of mobile phones.

Since the last generation of iPhones with the regular 6 and 6 Plus, the standard iPhone size has been 5.44 and 6.22 inches respectively. That wave of iPhones was considerably bigger (we mean that in the most relative sense) than previous incarnations of Apple’s trademark gadget. The size change may have been lost on normal consumers ready to scoop up whatever iPhone is foisted on them.

For instance, the iPhone 5s and 5c were both basically 4.9 inches in height, which had been the standard for the initial iPhone 5 incarnation as well. Prior to that, the subsequent iPhone generations just get smaller going all the way back to the first generation iPhone from 2007.

So why did Apple move towards bigger and bigger iPhones? You’d imagine the next move would be to make a compact iPhone model with each progressive incarnation so much so that in six year’s time the entire iPhone 9 will look something like Apple earbuds do now. Blame battery life and processor dimensions all you want, but Apple employs enough geniuses to figure out how to get more power in less of a package. It makes one wonder, wasn’t futuristic tech supposed to shrink into a convenient and inconspicuous size? And since when have we wanted to bring phones back to Zack Morris-sized proportions?

It isn’t just the iPhones either. While some said new iPads and Macs will be saved for another day, others rightly predicted that the iPad will get its own upgrade today in the form of the 12.9-inch iPad Pro. Its screen width is as big as the smaller iPad Air, which makes the new version basically laptop-sized. And this may inform Apple’s “bigger is better” tendency.

Increasing the size of its iPad is an undeniable move by Apple to bridge the gap between something like the MacBook and a tablet. Upping the size of the iPhone bridges that gap between the phone and the tablet too. But therein lies the problem.

Have you ever seen anyone talking on the iPhone 6 Plus? It’s a jarring sight usually reserved for the tech bros whose giant phones broadcast “overcompensating.” They’re even comically difficult to even hold in one hand. When you do come across someone chatting away on one, you almost think this is someone miming a conversation into their iPad. Nope, that’s the actual size of one of the new iPhones.

The size increase of the iPhone, while annoying for those who still believe tech as stylish and discreet as the iPhone should remain compact, doesn’t seem to be going anywhere. Making them the standard sizes for their iPhone models seems to fit best with the homogenous proportional succession from Apple Watch > iPhone > iPad > Macbook and so on. It looks like we’ll all have to put up with giant, near-tablet sized iPhones for the time being.