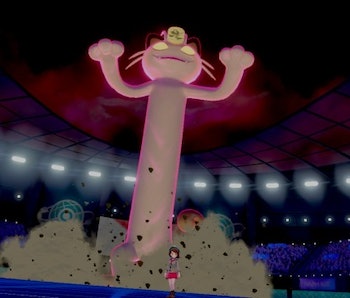 The latest trailer for Pokémon Sword and Shield unveiled the Gigantamax forms of five familiar monster faces on Wednesday. A lot of people were (rightly) bewitched by the cuddly curves of thicc boy Pikachu, but our hearts were stolen by the tubular brilliance of Gigantamax Meowth.

Pokémon fans on social media were quick to draw comparisons between Gigantamax Meowth and Longcat, a meme that went viral in the mid-2000s after a Japanese woman posted a photo of her unusually long-torsoed white cat. The wholesome image was quickly photoshopped into all sorts of outlandish settings, soaring through space and blasting magic spells with its outstretched paws. Longcat even inspired an imaginary, black-haired nemesis called Tacgnol (yep, it’s “Longcat” backwards). According to an article from May 2019 at The Next Web, the feline that launched a million tweets is still alive and happy some 15 years after becoming an internet phenomenon, living with his owner in Japan. (Fun fact: the word “nagai” means “long” or “lengthy” in Japanese.)

From the paws-up pose to the extended, tubey torso, there’s a pretty clear visual resemblance between the souped-up incarnation of Meowth and Longcat. The Gigantamax version’s shocking attack also brings to mind some of the fantasy-themed photoshops of the viral image.

Sword and Shield’s stretched-out Meowth isn’t the first game to pay homage to Longcat, and likely not the last. Anyone who’s played the indie RPG Undertale will probably see some similarities between this oddly elongated kitty and one of the canine inhabitants of Snowdin. Toby Fox’s cult hit is full of delightfully weird “enemy” encounters, and among the most memorable is Lesser Dog, an armor-clad pooch with a lolling tongue and a cheerful smile.

As with pretty much every battle in Undertale, you don’t need to resort to combat to win. Instead, you can take actions tailored to each monster you encounter to resolve the situation peacefully. Lesser Dog, for instance, responds well to petting. So well, in fact, that each time you pet the dog, his neck will grow longer and longer, disappearing off the top off the screen before coming back down, passing through the UI, and disappearing again. With Lesser Dog, Toby Fox essentially created the infinitely stretchy Longcat internet dreams are made of.

Will Gigantamax Meowth be as bonkers for pets as its kindred meme spirit, Lesser Dog? Probably not, but it would be pretty wild if you could take down a stadium-sized Pokémon by overstimulating it with friendly affection. Bear in mind, you can only get this version of Meowth if you pick up Sword and Shield by January 15, so if you love tube-shaped digital critters, look sharp.

Pokémon Sword and Shield and Longcat Meowth come to Nintendo Switch on November 15.