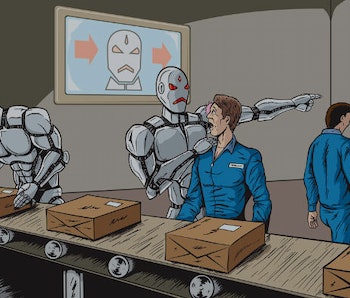 It looks like Americans aren’t too excited about working with artificial intelligence. According to a new survey from Oracle and Future Workplace, only 22 percent of American workers are “excited about AI.”

The researchers asked over 8,000 people in 10 different countries how they feel about AI in the workplace. The participants were between 18 and 74 years old. I’d imagine the older folks were the least excited about AI.

It’s unclear why Americans aren’t too excited about working with AI, but there are many possibilities. AI is often associated with societal problems like automation, deepfakes, racial issues and more in the American media.

Furthermore, people are often just generally resistant to having to work with new technology while they’re on the job.

Jeanne Meister, a founding partner at Future Workplace, tells Inverse that she believes the media has played a big role in how people view AI.

“I think the media has put a lot of fear into people,” Meister says. “I think there are a lot of misconceptions that need to be cleared up.”

Meister says managers need to tell employees that AI can help make their lives easier and that it’s not about them being replaced by robots.

“I think the conversation has to move from AI displacing jobs to AI automating tasks, and that leaves you, as the employee, with more free time to pursue more strategic tasks or drive more value to the organization,” Meister says.

There’s also just a “fear of the unknown,” Meister says. People worry about their workplace changing in any way if they’re comfortable at their job.

“I think the people who are inclined to use AI can really envision some use cases that actually a robot can deliver the answers to these frequently asked questions with speed and when they want it, rather than chasing around their manager who might not be available,” Meister says.

Whether American workers like it or not, AI is increasingly becoming a part of the workplace. Sometimes that means job losses and sometimes it means helpful innovations that make our work lives easier. If you don’t like your boss, maybe you’ll get lucky and get a robot boss soon. To me, that sounds like a nightmare.

More like this
Innovation
November 24, 2022
Human-free farms could solve a major food problem
By Molly Glick
Mind and Body
November 28, 2022
This is how much you need to move to offset a day of sitting
By Elana Spivack
Innovation
31 minutes ago
A sports physicist reveals the hidden science behind this year’s World Cup soccer ball
By The Conversation and John Eric Goff
Related Tags
Share: