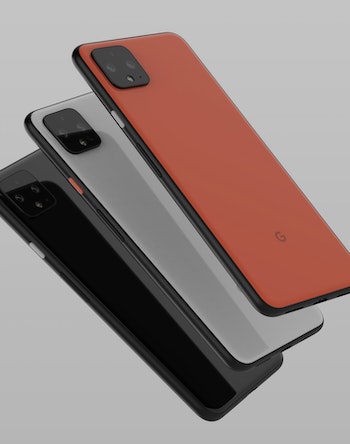 The star of the “Made by Google” event will be the Pixel 4 and 4 XL. Can the new Android phones bring the heat to finally take on the iPhone 11 Pro and Galaxy Note 10?

But phones are only one of many products we’re expecting from the tech giant. A new Chromebook, wireless earbuds, and smart home devices are all strongly rumored.

If you haven’t been lapping up every leak on Google’s new products, here’s everything you need to know in one place. And more importantly, why you should care about the new toys.

Google’s two new Android phones might be the most-leaked in history, so we’ll skip directly to the two most prominent features: big square camera bump on the back with dual cameras and big, thick “forehead” bezel above the display. You’ll either love or hate the design.

With the Pixel 3, Google cemented itself as a master of “computational photography,” which leans on machine learning to process a pleasing image (especially in low-light conditions with Night Sight). For Pixel 4, Google’s probably going to announce new camera features that again leverage software. Rumors suggest we’ll get a way to shoot astrophotography, enhanced zoom, and better night photos.

Beyond the cameras, the Pixel 4 and 4 XL’s other headlining feature will be “Motion Sense.” According to Google’s own blog post on the feature, “Motion Sense” uses a mini version of Google’s Soli radar sensor to detect when you’re near your Pixel 4 and then turn on face unlock.

The Soli sensor can also recognize hand gestures, which would allow for more accurate motion-based controls within apps.

Why you should care: As always, the Pixel 4 will set the stage for Android phones as a whole. From new Assistant features to radar technology that could push phone input beyond touch, the Pixel 4 will be a template for where Android’s going. It also might take back the crown for best smartphone camera from the iPhone 11/11 Pro.

Thanks to a comprehensive leak from 9to5Google, there’s little we don’t know about the Pixelbook Go. Resembling a MacBook, the Chromebook is expected to be made of magnesium and have a 13.3-inch touchscreen, available in Full HD or 4K.

The keyboard is described to be similar (if not identical) to the one on the Pixelbook — Chiclet-style with good travel — and the trackpad is smooth and responsive.

Most interesting is the bottom of the Pixelbook Go: it has a ribbed texture reminiscent of washboard, likely to keep the machine from sliding around on table.

9to5Google says the Pixelbook Go will come in “Just Black” and “Not Pink.”

Why you should care: MacBook Air and Pro keyboards are still bad. A more affordable laptop with the power to handle tons of Chrome tabs and a top-notch typing experience is a win for all consumers (not just students).

The first Pixel Buds, released in 2017, sucked. Not only were they not true wireless earbuds — they had a wire connecting the two buds together — but they sounded average and the Google Translate and Assistant features were half baked.

For Pixel Buds 2 to be even a semi-hit, Google’s gotta bring it with the features: true wireless design, great sound quality (preferably with noise cancelation), long battery life (both for the buds and additional charges from the case), and reliable and useful Assistant features.

Pricing needs to be competitive with $160 AirPods and $130 Samsung Galaxy Buds, too. If Pixel Buds 2 have noise cancelation, they can’t cost more than $250 Sony WF-1000XM3s or Microsoft’s upcoming $250 Surface Buds.

Why you should care: Surely, someone other than Apple can make true wireless earbuds that are attractive, smart, and reasonably priced, right?

Google’s cheapest smart speaker hasn’t been upgraded since it was introduced. Née Home Mini, the rebranded Nest Mini will likely look almost identical to the current version according to 9to5Google, but will sport better sound, a 3.5mm jack (perhaps for audio in or out), “some kind of proximity awareness,” and a built-in way to mount it to a wall.

Why you should care: With better sound and hopefully the same low price, there’s no reason to not get a smart speaker and keep living like a caveman.

Originally called Google Wifi, the new Nest Wifi router will reportedly come with Eero-style beacons, which extend your Wi-Fi network around the home.

The beacons will likely do more than blast Wi-Fi to dead zones. With built-in Google Assistant, the beacons will reportedly let you control your Nest Wifi network using your voice.

Why you should care: Google Wifi made it super easy to set up and manage your internet network. Google Assistant could make it even less of a chore. We’re not all meant to be IT guys.

These kind of big launch events always come with a few surprises. Google might share more details on Stadia, its game-streaming service launching in November.

It’s also possible the company may outline its plans for 5G (there’s rumors of a 5G Pixel 4 and unveil a Pixel Watch.

Even without any more product announcements, there will be plenty to think about as we move into the holiday shopping season.