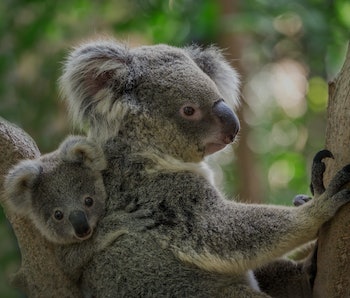 Evolution can be difficult to grasp. We usually think of it as happening in deep time, over thousands or millions of years, like when humans evolved from earlier primates. But new research shows how evolution is also taking place right before our eyes, as plants and animals adapt to diseases and other environmental pressures. That’s exactly what’s happening to the koala, the extremely cute marsupial from Australia that’s famous for munching on eucalyptus leaves and…uhh…having chlamydia.

Scientists have known for a while that the sexually transmitted infection is rampant among koalas, but the animal’s unique vulnerability to it, along with clusters of cancers in koala groups, like leukemia and lymphoma, suggested something more serious was going on. That “something more serious” turned out to be a retrovirus called KoRV-A gammaretrovirus that made the koala especially susceptible to secondary infections.

New research indicates that it’s pushing koala evolution in a very specific direction right now, in a way that can be observed on a human timescale. But whether or not that means a world with fewer diseased koalas, is less certain.

In a study published on Thursday in the journal Cell a team of researchers showed that koalas are actually developing a new type of immunity that can be observed in their genetic code, something scientists have known about in theory but had never previously observed as it was happening.

KoRV-A is a retrovirus like HIV, which means that it not only gets transmitted among individuals but also inserts itself into the koala genome, even infiltrating the germline to be passed to sperm and egg cells. Scientists in the new study describe how, as KoRV-A gets passed from generation to generation, the koala genome shows evidence that new sections of koala DNA are adapting to recognize and deactivate the viral RNA.

The process is sort of like a local convenience story putting up a picture of a shoplifter on the wall: When the suspect comes in in the future, the clerk will be able to recognize them and tell them to leave.

The koala’s DNA is doing the same thing. By replicating portions of the viral RNA and splicing it into the animal’s genetic code, the koala’s body cells have a reference that they can recognize when the virus shows up. This allows the cells to attempt to deactivate it on-sight.

This process is not so different from the ways in which all other animals have evolved throughout their histories. For instance, about eight percent of the human genetic code comes from viruses, evidence of this same process of infection, recognition, and defense.

When it comes to a retrovirus, though, the process is a bit more complicated because the virus that the koala needs to defend itself against is actually a part of its own DNA. So one portion of its genome is trying to deactivate another part. It’s beautiful, but also kind of a mess.

And unfortunately for the koala, it’s still in the midst of this process, and therefore it’s not yet able to completely deactivate the retrovirus.

But for scientists, this presents a rare opportunity to observe evolution in action. In this case, old pieces of this inserted reference genetic code have picked up mutations over time, rendering them non-infectious. The researchers behind the paper say this makes their genomic study something like archeology on a living creature.

“It’s almost like carbon dating,” Zhiping Weng, Ph.D., a computational biologist at the University of Massachusetts Medical School and a co-senior author on the paper, tells STAT News. “You can tell the sequences are old because they pick up a lot of defective pieces, so they don’t work.”

Perhaps most concerning, though, is that the researchers suspect KoRV-A is actually reviving some of these apparently deactivated portions of the viral genome and setting them loose. At least four sections of old viruses that are likely millions of years old in the koala genome are just as active as KoRV-A, William Theurkauf, Ph.D., professor in molecular medicine at UMass Medical School and another co-senior author on the new paper, tells The New York Times.

“KoRV may be activating these dormant old viruses,” he said. “It may really stir the pot.”

More research is needed for scientists to unravel this mystery, but for now, it seems that we’ll just have to watch this battle play out between the koala and the invaders hidden in its own DNA.

Abstract: Antisense Piwi-interacting RNAs (piRNAs) guide silencing of established transposons during germline development, and sense piRNAs drive ping-pong amplification of the antisense pool, but how the germ- line responds to genome invasion is not understood. The KoRV-A gammaretrovirus infects the soma and germline and is sweeping through wild koalas by a combination of horizontal and vertical transfer, allow- ing direct analysis of retroviral invasion of the germline genome. Gammaretroviruses produce spliced Env mRNAs and unspliced transcripts encoding Gag, Pol, and the viral genome, but KoRV-A piRNAs are almost exclusively derived from unspliced genomic transcripts and are strongly sense-strand biased. Significantly, selective piRNA processing of unspliced proviral transcripts is conserved from insects to placental mammals. We speculate that bypassed splicing generates a conserved molecular pattern that directs proviral genomic transcripts to the piRNA biogenesis machinery and that this ‘‘innate’’ piRNA response suppresses transposition until antisense piRNAs are produced, establishing sequence-specific adaptive immunity.