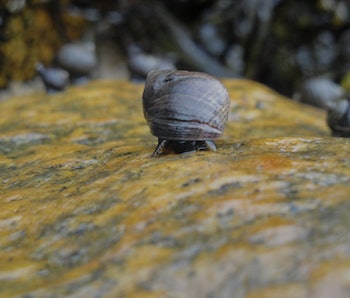 Have you heard of periwinkles? Not the color, but the sea snail making like tiny X-Men and evolving at superspeeds to heroically survive the next century of climate change. Their newfound powers might just be strong enough to give their surrounding ecosystems a boost, too.

As the level of carbon dioxide in the atmosphere increases, the acidity of the planet’s oceans increases along with it. This is causing various marine ecosystems to degrade — they can’t tolerate the lower pH levels. We didn’t think anything had the power to evolve quickly enough to resist ocean acidification, and we were blessedly wrong. Scientists studying the periwinkles have observed an ability to “rejigger” their shell-making process, customizing them to adapt to the new conditions. The research was published Wednesday in the journal Environmental Science & Technology.

Ocean pH currently averages around 8.10. By the year 2100, it’s expected to fall to 7.85. A team of researchers exposed a group of periwinkles to those conditions and found that though their metabolism dropped off, they actually developed the ability to create their shells faster, essentially by making them less dense and less soluble and more resistant to acid.

“The periwinkles, those are just like lab rats here,” says first author Sean D. Connell. “Now that we’ve discovered that they can operate that way, we want to expand to understand where this occurs in other species, particularly species critical to maintaining ecosystems.”

Connell and his colleagues saw a similar pattern of behavior in anthropods; allowing multiple generations of sea creatures to go through this process increases the volume of herbivores in the area as well. Basically, carbon enrichment, a friendly enough sounding phrase, can boost the growth of some plants. That boom attracts more herbivores, which as the food chain taught in elementary school shows, will in-turn attract more predators. Everyone helps consume the excess carbon and stabilize the ecosystem.

“This whole idea that nature can be kept in balance is understudied,” Connell says. “People are working on ocean acidification … but this is new because it actually talks about the process of counterchange, stabilizing the ocean in the face of climate change.”

So if the hardiness of periwinkles and other critters can lead to a rapid expansion of ocean herbivores, we have a model for attempting to fight the effects of climate change in marine protected areas, or for harvesting herbivores of various kinds. Will the periwinkles be able to keep this up?

“That’s a very good question,” Connell says. “That’s what people are starting to work on now. Ecologically, it looks like the animals might keep pace. I think there’s every possibility.”

Reduction in seawater pH due to rising levels of anthropogenic carbon dioxide (CO2) in the world’s oceans is a major force set to shape the future of marine ecosystems and the ecological services they provide [1,2]. In particular, ocean acidification is predicted to have a detrimental effect on the physiology of calcifying organisms [3]. Yet, the indirect effects of ocean acidification on calcifying organisms, which may counter or exacerbate direct effects, is uncertain. Using volcanic CO2 vents, we tested the indirect effects of ocean acidification on a calcifying herbivore (gastropod) within the natural complexity of an ecological system. Contrary to predictions, the abundance of this calcifier was greater at vent sites (with near-future CO2 levels). Furthermore, translocation experiments demonstrated that ocean acidification did not drive increases in gastropod abundance directly, but indirectly as a function of increased habitat and food (algal biomass). We conclude that the effect of ocean acidification on algae (primary producers) can have a strong, indirect positive influence on the abundance of some calcifying herbivores, which can overwhelm any direct negative effects. This finding points to the need to understand ecological processes that buffer the negative effects of environmental change.