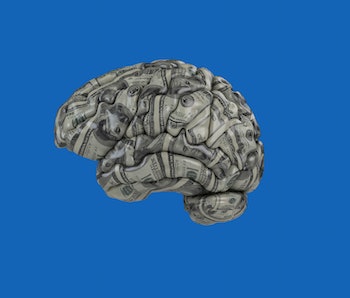 With the ultra-wealthy already preparing for the next recession, it can be helpful to consider what we’ve learned from past economic disasters. But one of the most important insights gained may have nothing to do with shoddy housing markets, or even economics at all. Instead, it has to do with our brains — and the fact that when incomes come crashing down, cognitive health can take a serious hit.

According to the results of a study published Wednesday in Neurology people who experienced two or more income drops of 25 percent or more can show signs of “unhealthy aging” in the brain. The research also links income volatility to poor performance on cognitive tests and physical changes to the brain. In a statement, lead study author Leslie Grasset, Ph.D., a postdoctoral associate at the Inserm Research Center in France, put things in perspective:

“For reference, this poor performance is greater than what is normally seen due to one year in aging.”

But the bad news, as Grasset tells Inverse, is that income instability is still persistent. This work suggests that it’s that unpredictable change for the worse that takes a big toll on the brain.

Grasset explains that, while income volatility has been on the rise since the 1980s, the previous studies that examined the relationship between income and cognitive health only factored in income at one or two points in time. Because of this “it then seemed important to investigate the relationship between brain aging and fluctuations in income.”

This study was conducted on 3,287 people between the ages of 25- to 35-years old. Each individual reported their incomes between 1990 and 2010. All of them and performed cognitive tests, and 716 agreed to have the brains scanned in 2010. That timescale put them right in the middle of the 2008 financial crisis, a very volatile time for income.

This process revealed that it’s not really about the size of the income drop as much as it is about how frequent income drops are, in turn revealing how unstable your economic status actually is.

After adjusting for other factors, two or more drops in income were associated with worse performance on a series of brain tests and showed physical signs of aging in the brain.

How unstable incomes impact the brain

Specifically, the participants performed worse on executive functioning tests, which are designed to measure higher-level thinking processes related to planning or controlling behavior. Individuals with two or more drops in income scored 2.8 percent worse on those tests. And to add to that, they also showed slower processing speed, suggesting that their cognitive processes had slowed.

"It then seemed important to investigate the relationship between brain aging and fluctuations in income."

On the physical side, two or more income drops were associated with a decrease in brain connectivity and lower volume of white matter in the brain. White matter is important because it forms the foundational scaffolding for communication between certain areas of the brain, and it does tend to decrease with aging. Other lifestyle factors, like alcohol can also decrease white matter, but it turns out that living in an unstable economic world may also take a toll.

Importantly, this study just shows that there’s a relationship between income, and signs of aging in the brain. It can’t directly show that one causes the other. But on the bright side, Grasset still has some ideas of how it might be possible to offset these effects.

Regardless of how brain-related aging is caused, there’s ongoing research that shows how simple interventions, like daily puzzles and light exercise, can help combat cognitive decline. For example, a study published in April in JAMA Network Open on found that people who averaged 10,00 steps per day have .35 percent higher brain volumes than those who only reached 5,000. That’s the equivalent of about 1.75 fewer years of brain aging.

Grasset also emphasizes the importance of physical activity, explaining that, “Different factors, such as cardiovascular factors or physical activity, have been evidenced as risk factors for cognitive aging, and may be useful for healthy aging and prevention of cognitive impairment.”

Although there are things we can do to fight back, the bigger picture around Grasset’s results speak to just how important it is to consider a person’s entire life when we look at their brain health. It may not be obvious to look at a bank account history for a sign of extra stress on the brain, but there could be extra clues lurking there all the same.

Results: After covariate adjustment, higher income volatility was associated with worse performance on processing speed (β = −1.09, 95% confidence interval [CI] −1.73 to −0.44) and executive functioning (β = 2.53, 95% CI 0.60–4.50) but not on verbal memory (β = −0.02, 95% CI −0.16 to 0.11). Similarly, additional income drops were associated with worse performance on processing speed and executive functioning. Higher income volatility and more income drops were also associated with worse microstructural integrity of total brain and total white matter. All findings were similar when restricted to those with high education, suggesting reverse causation may not explain these findings.

Conclusion: Income volatility over a 20-year period of formative earning years was associated with worse cognitive function and brain integrity in midlife.

More like this
Mind and Body
6.15.2022 12:00 AM
The right time to make a decision may depend on this overlooked biological factor
By Jocelyn Solis-Moreira
Mind and Body
6.25.2022 3:00 PM
What makes eggs organic? A USDA expert cracks open the complicated answer
By Elana Spivack
Mind and Body
6.21.2022 10:00 AM
What is hybrid immunity? Two experts explain the mix of vaccination and infection
By Grace C Roberts, Lena Glaser and The Conversation
Related Tags
Share: